Our extensive research has shown that imitating the smart money can generate significant returns for retail investors, which is why we track more than 700 prominent money managers and analyze their quarterly 13F filings. The stocks that are heavily bought by hedge funds historically outperformed the market, though there is no shortage of high profile failures like hedge funds’ recent losses in Facebook. Let’s take a closer look at what the funds we track think about Del Frisco’s Restaurant Group Inc (NASDAQ:DFRG) in this article.

Is Del Frisco’s Restaurant Group Inc (NASDAQ:DFRG) the right investment to pursue these days? The best stock pickers are reducing their bets on the stock. The number of bullish hedge fund positions dropped by 1 in recent months. Our calculations also showed that DFRG isn’t among the 30 most popular stocks among hedge funds.

If you’d ask most stock holders, hedge funds are perceived as worthless, outdated financial tools of yesteryear. While there are over 8,000 funds with their doors open at the moment, We hone in on the leaders of this club, about 700 funds. These investment experts manage bulk of the smart money’s total capital, and by keeping track of their matchless equity investments, Insider Monkey has uncovered a number of investment strategies that have historically exceeded the market. Insider Monkey’s flagship hedge fund strategy defeated the S&P 500 index by 6 percentage points per year since its inception in May 2014 through early November 2018. We were able to generate large returns even by identifying short candidates. Our portfolio of short stocks lost 24% since February 2017 (through December 3rd) even though the market was up nearly 23% during the same period. We just shared a list of 11 short targets in our latest quarterly update.

Heading into the fourth quarter of 2018, a total of 14 of the hedge funds tracked by Insider Monkey were bullish on this stock, a change of -7% from the previous quarter. The graph below displays the number of hedge funds with bullish position in DFRG over the last 13 quarters. So, let’s check out which hedge funds were among the top holders of the stock and which hedge funds were making big moves. 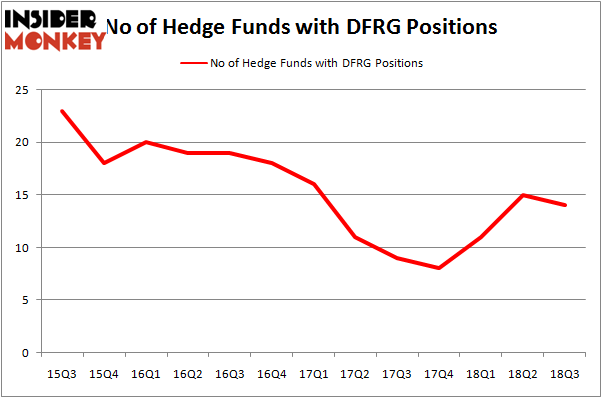 More specifically, Armistice Capital was the largest shareholder of Del Frisco’s Restaurant Group Inc (NASDAQ:DFRG), with a stake worth $31.2 million reported as of the end of September. Trailing Armistice Capital was Renaissance Technologies, which amassed a stake valued at $3.1 million. AQR Capital Management, Harvest Capital Strategies, and D E Shaw were also very fond of the stock, giving the stock large weights in their portfolios.

Since Del Frisco’s Restaurant Group Inc (NASDAQ:DFRG) has experienced bearish sentiment from the aggregate hedge fund industry, logic holds that there lies a certain “tier” of fund managers that elected to cut their positions entirely last quarter. Interestingly, Amy Minella’s Cardinal Capital cut the largest investment of all the hedgies monitored by Insider Monkey, worth about $22.6 million in stock. Philippe Laffont’s fund, Coatue Management, also cut its stock, about $0.3 million worth. These transactions are important to note, as aggregate hedge fund interest dropped by 1 funds last quarter.

As you can see these stocks had an average of 3.75 hedge funds with bullish positions and the average amount invested in these stocks was $9 million. That figure was $49 million in DFRG’s case. Graham Corporation (NYSE:GHM) is the most popular stock in this table. On the other hand Majesco (NYSE:MJCO) is the least popular one with only 2 bullish hedge fund positions. Compared to these stocks Del Frisco’s Restaurant Group Inc (NASDAQ:DFRG) is more popular among hedge funds. Considering that hedge funds are fond of this stock in relation to its market cap peers, it may be a good idea to analyze it in detail and potentially include it in your portfolio.