Concerns over rising interest rates and expected further rate increases have hit several stocks hard since the end of the third quarter. NASDAQ and Russell 2000 indices are already in correction territory. More importantly, Russell 2000 ETF (IWM) underperformed the larger S&P 500 ETF (SPY) by about 4 percentage points in the first half of the fourth quarter. Hedge funds and institutional investors tracked by Insider Monkey usually invest a disproportionate amount of their portfolios in smaller cap stocks. We have been receiving indications that hedge funds were paring back their overall exposure and this is one of the factors behind the recent movements in major indices. In this article, we will take a closer look at hedge fund sentiment towards Continental Resources, Inc. (NYSE:CLR).

Is Continental Resources, Inc. (NYSE:CLR) a buy here? The best stock pickers are selling. The number of long hedge fund bets went down by 4 lately. Our calculations also showed that clr isn’t among the 30 most popular stocks among hedge funds. CLR was in 29 hedge funds’ portfolios at the end of the third quarter of 2018. There were 33 hedge funds in our database with CLR positions at the end of the previous quarter.

In the eyes of most market participants, hedge funds are seen as underperforming, outdated investment vehicles of years past. While there are more than 8,000 funds trading at the moment, Our researchers choose to focus on the elite of this club, approximately 700 funds. Most estimates calculate that this group of people administer the lion’s share of the smart money’s total asset base, and by following their top stock picks, Insider Monkey has brought to light a number of investment strategies that have historically outperformed Mr. Market. Insider Monkey’s flagship hedge fund strategy beat the S&P 500 index by 6 percentage points per year since its inception in May 2014 through early November 2018. We were able to generate large returns even by identifying short candidates. Our portfolio of short stocks lost 24% since February 2017 (through December 3rd) even though the market was up nearly 23% during the same period. We just shared a list of 11 short targets in our latest quarterly update.

How have hedgies been trading Continental Resources, Inc. (NYSE:CLR)? 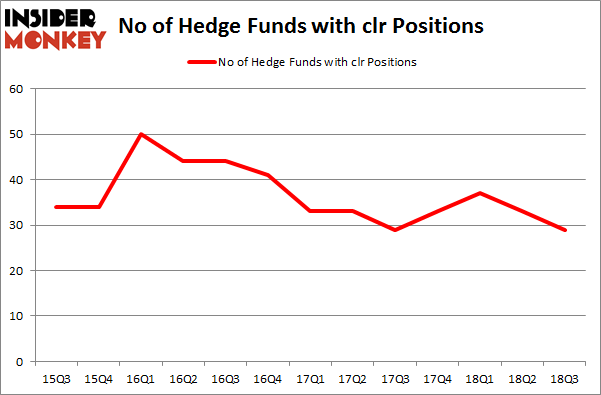 More specifically, D E Shaw was the largest shareholder of Continental Resources, Inc. (NYSE:CLR), with a stake worth $164 million reported as of the end of September. Trailing D E Shaw was Two Sigma Advisors, which amassed a stake valued at $97.2 million. Arrowstreet Capital, Point72 Asset Management, and Perella Weinberg Partners were also very fond of the stock, giving the stock large weights in their portfolios.

Since Continental Resources, Inc. (NYSE:CLR) has faced declining sentiment from the entirety of the hedge funds we track, we can see that there is a sect of money managers that slashed their full holdings in the third quarter. Interestingly, Principal Global Investors’s Columbus Circle Investors said goodbye to the largest position of all the hedgies watched by Insider Monkey, comprising an estimated $29.8 million in stock. Todd J. Kantor’s fund, Encompass Capital Advisors, also dropped its stock, about $24.1 million worth. These transactions are important to note, as total hedge fund interest dropped by 4 funds in the third quarter.

As you can see these stocks had an average of 33.75 hedge funds with bullish positions and the average amount invested in these stocks was $1.0 billion. That figure was $609 million in CLR’s case. Ingersoll-Rand Plc (NYSE:IR) is the most popular stock in this table. On the other hand AvalonBay Communities Inc (NYSE:AVB) is the least popular one with only 26 bullish hedge fund positions. Continental Resources, Inc. (NYSE:CLR) is not the least popular stock in this group but hedge fund interest is still below average. This is a slightly negative signal and we’d rather spend our time researching stocks that hedge funds are piling on. In this regard IR might be a better candidate to consider a long position.