Is CNOOC Ltd (ADR) (NYSE:CEO) a buy right now? The best stock pickers are actually becoming less hopeful. The number of long hedge fund bets that are revealed through the 13F filings were trimmed by 3 lately. CEO was in 9 hedge funds’ portfolios at the end of September. There were 12 hedge funds in our database with CEO holdings at the end of the previous quarter. At the end of this article we will also compare CEO to other stocks including First Cash Financial Services, Inc. (NASDAQ:FCFS), Lakeland Financial Corporation (NASDAQ:LKFN), and Shenandoah Telecommunications Company (NASDAQ:SHEN) to get a better sense of its popularity.

With all of this in mind, we’re going to review the latest action encompassing CNOOC Ltd (ADR) (NYSE:CEO). 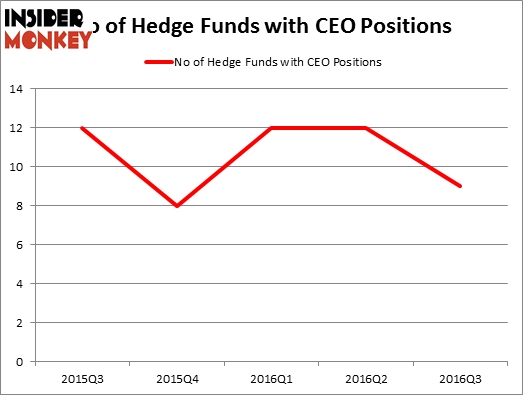 According to publicly available hedge fund and institutional investor holdings data compiled by Insider Monkey, Peter Rathjens, Bruce Clarke and John Campbell’s Arrowstreet Capital has the most valuable position in CNOOC Ltd (ADR) (NYSE:CEO), worth close to $49.4 million. Sitting at the No. 2 spot is Renaissance Technologies, one of the largest hedge funds in the world, holding a $22.3 million position. Other professional money managers with similar optimism encompass Howard Marks’ Oaktree Capital Management, and Ben Levine, Andrew Manuel and Stefan Renold’s LMR Partners. We should note that none of these hedge funds are among our list of the 100 best performing hedge funds which is based on the performance of their 13F long positions in non-microcap stocks.