While the market driven by short-term sentiment influenced by uncertainty regarding the future of the interest rate environment in the US, declining oil prices and the trade war with China, many smart money investors are keeping their optimism regarding the current bull run, while still hedging many of their long positions. However, as we know, big investors usually buy stocks with strong fundamentals, which is why we believe we can profit from imitating them. In this article, we are going to take a look at the smart money sentiment surrounding CIT Group Inc. (NYSE:CIT).

CIT Group Inc. (NYSE:CIT) has seen a decrease in hedge fund interest of late. Our calculations also showed that CIT isn’t among the 30 most popular stocks among hedge funds.

If you’d ask most shareholders, hedge funds are viewed as underperforming, outdated investment tools of yesteryear. While there are more than 8,000 funds trading today, Our experts choose to focus on the elite of this group, around 700 funds. These hedge fund managers shepherd bulk of the smart money’s total asset base, and by paying attention to their inimitable investments, Insider Monkey has figured out numerous investment strategies that have historically outpaced the S&P 500 index. Insider Monkey’s flagship hedge fund strategy exceeded the S&P 500 index by 6 percentage points annually since its inception in May 2014 through early November 2018. We were able to generate large returns even by identifying short candidates. Our portfolio of short stocks lost 24% since February 2017 (through December 3rd) even though the market was up nearly 23% during the same period. We just shared a list of 11 short targets in our latest quarterly update. 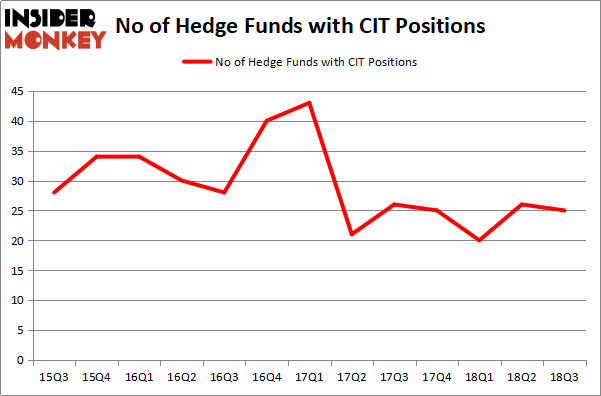 Of the funds tracked by Insider Monkey, First Pacific Advisors LLC, managed by Robert Rodriguez and Steven Romick, holds the biggest position in CIT Group Inc. (NYSE:CIT). First Pacific Advisors LLC has a $482.2 million position in the stock, comprising 3.5% of its 13F portfolio. Sitting at the No. 2 spot is Jeffrey Altman of Owl Creek Asset Management, with a $117 million position; 5.6% of its 13F portfolio is allocated to the stock. Other professional money managers that are bullish encompass Israel Englander’s Millennium Management, Anthony Bozza’s Lakewood Capital Management and Michael Price’s MFP Investors.

Since CIT Group Inc. (NYSE:CIT) has experienced a decline in interest from the smart money, logic holds that there is a sect of hedge funds that slashed their positions entirely by the end of the third quarter. Interestingly, Douglas Braunstein and James Wooleryá’s Hudson Executive Capital dropped the biggest position of the 700 funds followed by Insider Monkey, worth about $35.9 million in stock, and Jonathan Kolatch’s Redwood Capital Management was right behind this move, as the fund dropped about $20.2 million worth. These bearish behaviors are important to note, as total hedge fund interest was cut by 1 funds by the end of the third quarter.

As you can see these stocks had an average of 29.5 hedge funds with bullish positions and the average amount invested in these stocks was $613 million. That figure was $899 million in CIT’s case. ICU Medical, Inc. (NASDAQ:ICUI) is the most popular stock in this table. On the other hand Genpact Limited (NYSE:G) is the least popular one with only 21 bullish hedge fund positions. CIT Group Inc. (NYSE:CIT) is not the least popular stock in this group but hedge fund interest is still below average. This is a slightly negative signal and we’d rather spend our time researching stocks that hedge funds are piling on. In this regard ICUI might be a better candidate to consider a long position.