We can judge whether Atara Biotherapeutics Inc (NASDAQ:ATRA) is a good investment right now by following the lead of some of the best investors in the world and piggybacking their ideas. There’s no better way to get these firms’ immense resources and analytical capabilities working for us than to follow their lead into their best ideas. While not all of these picks will be winners, research shows that these picks historically outperformed the market when we factor in known risk factors.

Atara Biotherapeutics Inc (NASDAQ:ATRA) investors should be aware of a decrease in hedge fund interest lately. ATRA was in 12 hedge funds’ portfolios at the end of the third quarter of 2018. There were 14 hedge funds in our database with ATRA holdings at the end of the previous quarter. Our calculations also showed that atra isn’t among the 30 most popular stocks among hedge funds.

At Q3’s end, a total of 12 of the hedge funds tracked by Insider Monkey held long positions in this stock, a change of -14% from the previous quarter. Below, you can check out the change in hedge fund sentiment towards ATRA over the last 13 quarters. So, let’s find out which hedge funds were among the top holders of the stock and which hedge funds were making big moves. 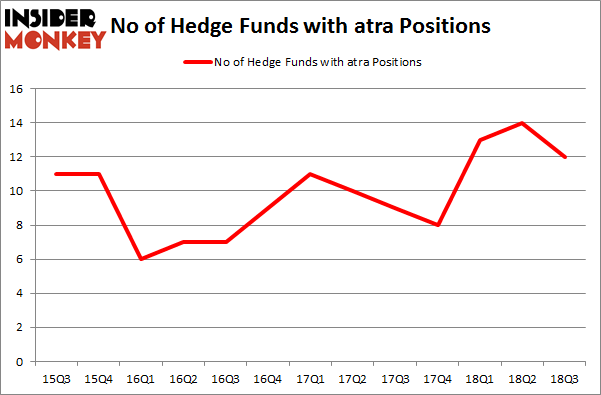 More specifically, Baupost Group was the largest shareholder of Atara Biotherapeutics Inc (NASDAQ:ATRA), with a stake worth $258.6 million reported as of the end of September. Trailing Baupost Group was Redmile Group, which amassed a stake valued at $174.4 million. Bridger Management, Camber Capital Management, and Driehaus Capital were also very fond of the stock, giving the stock large weights in their portfolios.

Since Atara Biotherapeutics Inc (NASDAQ:ATRA) has experienced falling interest from hedge fund managers, it’s easy to see that there is a sect of hedgies that elected to cut their positions entirely in the third quarter. It’s worth mentioning that Israel Englander’s Millennium Management cut the largest position of the “upper crust” of funds followed by Insider Monkey, worth an estimated $3.7 million in stock, and David Costen Haley’s HBK Investments was right behind this move, as the fund said goodbye to about $0.5 million worth. These bearish behaviors are intriguing to say the least, as aggregate hedge fund interest was cut by 2 funds in the third quarter.

As you can see these stocks had an average of 13.25 hedge funds with bullish positions and the average amount invested in these stocks was $139 million. That figure was $634 million in ATRA’s case. Kaman Corporation (NYSE:KAMN) is the most popular stock in this table. On the other hand FBL Financial Group, Inc. (NYSE:FFG) is the least popular one with only 4 bullish hedge fund positions. Atara Biotherapeutics Inc (NASDAQ:ATRA) is not the least popular stock in this group but hedge fund interest is still below average. This is a slightly negative signal and we’d rather spend our time researching stocks that hedge funds are piling on. In this regard KAMN might be a better candidate to consider a long position.