In the banking world, sometimes boring is better.

Headquartered in quiet Winston Salem, North Carolina, BB&T Corporation (NYSE:BBT) avoided many of the pitfalls that ultimately plagued numerous regional banks across the country during the financial crisis. As investors in formerly troubled banks like SunTrust Banks, Inc. (NYSE:STI) or Citigroup Inc. (NYSE:C) toss and turn in their beds tonight in anticipation of the Federal Reserve’s announcement of the annual stress test results, BB&T shareholders will sleep peacefully knowing the bank is executing its strategy, and building sustainable capital ratios.

What to expect
Last year, the Federal Reserve’s stress test and Comprehensive Capital Analysis and Review results validated BB&T Corporation (NYSE:BBT)’s financial strength, and the bank raised its dividend 25%. Although evaluation of the nation’s 19 largest banks’ future dividends and capital policies won’t be public until CCAR results are reported next Thursday, tomorrow’s Dodd-Frank stress test results will give investors a point of comparison across the financial institutions. The results, scheduled to be released tomorrow at 4:30 pm, will evaluate the impact of a hypothetical economic downturn on banks’ earning potential and balance sheet strength. Some of the factors in the Federal Reserve’s “severely adverse scenario” include:

Not apples to apples
Although BB&T Corporation (NYSE:BBT)’s balance sheet held up well during previous stress tests and capital reviews, investors should note the significant changes to the bank’s balance sheet and business from the acquisitions of Crump Insurance in April 2012, and Bank Atlantic in July 2012. While these acquisitions greatly increased BB&T’s presence in the U.S. wholesale insurance and Florida markets, the moves negatively impact the calculation of Tier 1 common equity ratios as a result of the increase in intangible assets connected to the deals. Given the fact that the deals required Fed approval, investors shouldn’t be too concerned with the adverse impact on capital levels.

BB&T CEO Kelly King has spent over 40 years of his career at the bank, and led the company to a record year in 2012, while bolstering its presence in new markets. Investors have not allowed King’s progress to go unnoticed, as the market has consistently valued BB&T Corporation (NYSE:BBT) at a premium compared to its peers SunTrust Banks, Inc. (NYSE:STI), Regions Financial Corporation (NYSE:RF), and Fifth Third Bancorp (NASDAQ:FITB). 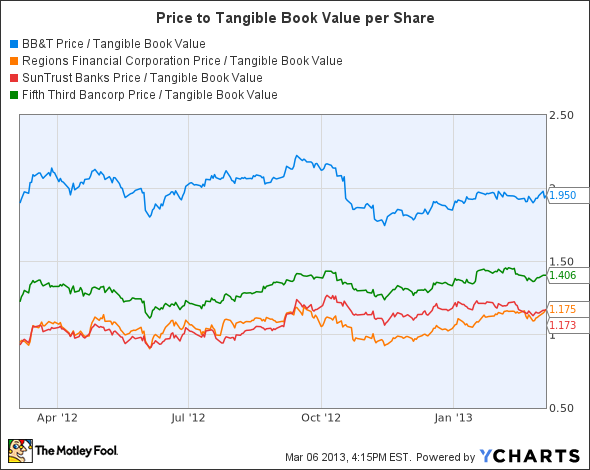 While current BB&T shareholders will want to pay close attention to the bank’s results, investors interested in adding exposure to the large, regional banking sector may be better served keeping a close eye on BB&T’s lesser-valued competitors.

The article Should Investors in This Bank Be Stressing? originally appeared on Fool.com and is written by David Hanson.

David Hanson has no position in any stocks mentioned. The Motley Fool owns shares of Citigroup Inc (NYSE:C) and Fifth Third Bancorp (NASDAQ:FITB).