Should I Avoid The Liberty SiriusXM Group (LSXMA)?

How do you pick the next stock to invest in? One way would be to spend days of research browsing through thousands of publicly traded companies. However, an easier way is to look at the stocks that smart money investors are collectively bullish on. Hedge funds and other institutional investors usually invest large amounts of capital and have to conduct due diligence while choosing their next pick. They don’t always get it right, but, on average, their stock picks historically generated strong returns after adjusting for known risk factors. With this in mind, let’s take a look at the recent hedge fund activity surrounding The Liberty SiriusXM Group (NASDAQ:LSXMA) and determine whether hedge funds had an edge regarding this stock.

The Liberty SiriusXM Group (NASDAQ:LSXMA) has seen a decrease in hedge fund interest of late. The Liberty SiriusXM Group (NASDAQ:LSXMA) was in 46 hedge funds’ portfolios at the end of June. The all time high for this statistics is 50. Our calculations also showed that LSXMA isn’t among the 30 most popular stocks among hedge funds (click for Q2 rankings and see the video for a quick look at the top 5 stocks).

To most market participants, hedge funds are seen as underperforming, old financial vehicles of yesteryear. While there are more than 8000 funds trading at the moment, We hone in on the elite of this group, about 850 funds. These hedge fund managers manage bulk of the hedge fund industry’s total asset base, and by monitoring their top investments, Insider Monkey has identified a number of investment strategies that have historically outperformed Mr. Market. Insider Monkey’s flagship short hedge fund strategy surpassed the S&P 500 short ETFs by around 20 percentage points annually since its inception in March 2017. Our portfolio of short stocks lost 34% since February 2017 (through August 17th) even though the market was up 53% during the same period. We just shared a list of 8 short targets in our latest quarterly update .

At Insider Monkey we scour multiple sources to uncover the next great investment idea. For example, legal marijuana is one of the fastest growing industries right now, so we are checking out stock pitches like “the Starbucks of cannabis” to identify the next tenbagger. Federal Reserve has been creating trillions of dollars electronically to keep the interest rates near zero. We believe this will lead to inflation and boost precious metals prices. So, we are checking out this junior gold mining stock. We read hedge fund investor letters and listen to stock pitches at hedge fund conferences. We go through lists like the 10 most profitable companies in the world to pick the best large-cap stocks to buy. Even though we recommend positions in only a tiny fraction of the companies we analyze, we check out as many stocks as we can. With all of this in mind we’re going to analyze the key hedge fund action surrounding The Liberty SiriusXM Group (NASDAQ:LSXMA).

At second quarter’s end, a total of 46 of the hedge funds tracked by Insider Monkey were long this stock, a change of -4% from one quarter earlier. Below, you can check out the change in hedge fund sentiment towards LSXMA over the last 20 quarters. With hedge funds’ sentiment swirling, there exists an “upper tier” of key hedge fund managers who were increasing their holdings meaningfully (or already accumulated large positions). 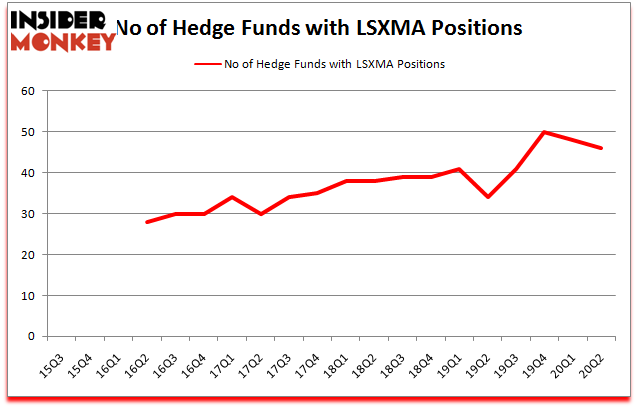 More specifically, Berkshire Hathaway was the largest shareholder of The Liberty SiriusXM Group (NASDAQ:LSXMA), with a stake worth $513 million reported as of the end of September. Trailing Berkshire Hathaway was D E Shaw, which amassed a stake valued at $146 million. Citadel Investment Group, Nitorum Capital, and FPR Partners were also very fond of the stock, becoming one of the largest hedge fund holders of the company. In terms of the portfolio weights assigned to each position Raging Capital Management allocated the biggest weight to The Liberty SiriusXM Group (NASDAQ:LSXMA), around 10.08% of its 13F portfolio. Kingstown Capital Management is also relatively very bullish on the stock, setting aside 5.69 percent of its 13F equity portfolio to LSXMA.

Because The Liberty SiriusXM Group (NASDAQ:LSXMA) has faced bearish sentiment from hedge fund managers, it’s safe to say that there exists a select few hedge funds that elected to cut their entire stakes by the end of the second quarter. At the top of the heap, Seth Klarman’s Baupost Group dumped the largest stake of all the hedgies watched by Insider Monkey, valued at about $19.8 million in stock, and Mitch Kuflik and Rob Sobel’s Brahman Capital was right behind this move, as the fund sold off about $12.6 million worth. These transactions are important to note, as aggregate hedge fund interest dropped by 2 funds by the end of the second quarter.

As you can see these stocks had an average of 32.6 hedge funds with bullish positions and the average amount invested in these stocks was $581 million. That figure was $1295 million in LSXMA’s case. Western Digital Corporation (NASDAQ:WDC) is the most popular stock in this table. On the other hand Duke Realty Corporation (NYSE:DRE) is the least popular one with only 19 bullish hedge fund positions. The Liberty SiriusXM Group (NASDAQ:LSXMA) is not the most popular stock in this group but hedge fund interest is still above average. Our overall hedge fund sentiment score for LSXMA is 75.6. Stocks with higher number of hedge fund positions relative to other stocks as well as relative to their historical range receive a higher sentiment score. This is a slightly positive signal but we’d rather spend our time researching stocks that hedge funds are piling on. Our calculations showed that top 10 most popular stocks among hedge funds returned 41.4% in 2019 and outperformed the S&P 500 ETF (SPY) by 10.1 percentage points. These stocks gained 33% in 2020 through the end of August and beat the market by 23.2 percentage points. Unfortunately LSXMA wasn’t nearly as popular as these 10 stocks and hedge funds that were betting on LSXMA were disappointed as the stock returned 5.2% during the same time period and underperformed the market. If you are interested in investing in large cap stocks with huge upside potential, you should check out the top 10 most popular stocks among hedge funds as many of these stocks already outperformed the market so far this year.