ValueWalk and its partners hosted its latest contrarian virtual conference, organized by ValueWalk, Contrarian Podcast and Breakout Point today, and one of the presenters was Bradley Safalow of PAA Research. He pitched pet insurance company Trupanion Inc (NASDAQ:TRUP) as a short position.

In fact, he said it’s one of his favorite short ideas and possibly the best short he’s come across in his career. The stock tumbled in premarket trading after his presentation, falling by as much as 7%.

Safalow expects the shares to fall below $10. He describes it as a “structurally flawed, unprofitable company positioned to growth investors as a tech/SAAS story.” He argues that Trupanion Inc will never be profitable.

The company’s differentiator is that it pays a 90% reimbursement rate on claims, but the company is backing away from this in one state. Safalow expects it to also back away from it in other states.

Most of its clients are acquired through the vet channel. However, Safalow pointed out that this model means the company is mostly getting pets that already have health problems.

This year Trupanion’s stock has gone up, but its earnings estimates have gone down. He believes that a short squeeze has been going on, sending the stock through the roof.

However, consensus earnings estimates for this year and next year have fallen over the last 18 months. Short interest has declined over the last six to nine months.

Bulls Cite Penetrate Rate, But That Should Be Discounted

Safalow believes the long thesis is based on the low penetration of the market. There are about 184 million dogs and cats in the U.S. and only 2.5 million pet owners had insurance as of last year. Bulls also note that 25% of pet owners in the U.K. have insurance.

He also pointed out that Trupanion Inc’s policies cost almost 50% to 100% more than the average cost for the industry.

Safalow added that company management wants to “create the aura of scalability” based on a measure of profitability before marketing spending. However, he doesn’t believe the business is scalable.

Warning About Competition For Trupanion

There is also plenty of competition in the space, and most competitors are cheaper. As a result, he said Trupanion Inc’s market share losses are accelerating while its pet acquisition cost has exploded. Further, the company has been raising its rates higher and higher over the last two years.

It also faces regulatory risk as there is talk about getting pet insurance companies to compensate vets for signing up new pets, which would eliminate the moat around its pet acquisition model.

Safalow also said Trupanion has been a big winner from COVID-19. People adopted more pets during the lockdown, and claims were lower because they didn’t go to the vet as often. The company also slashed its marketing spend, but none of these benefits are sustainable.

Safalow sees the valuation as “absurd,” noting that comparable companies in the pet insurance industry have sold for about $500 to $600 per pet. Trupanion Inc trades for about $3,400 per pet.

Here are the details on his short thesis for the company: 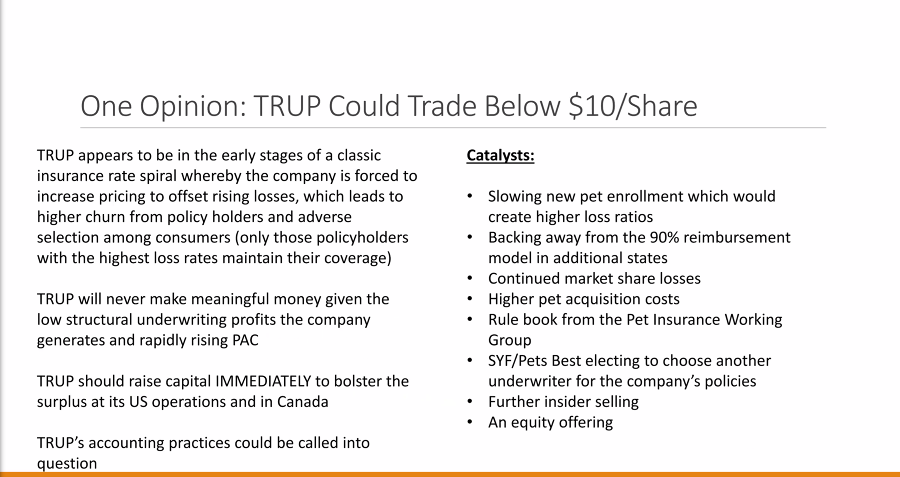