This year has brought us some stocks that have head-scratchingly doubled in value — much to the displeasure of my CAPS score. As you can see in the chart below, Best Buy Co., Inc. (NYSE:BBY), Angie’s List Inc (NASDAQ:ANGI), and RadioShack Corporation (NYSE:RSH) returned 113%, 103%, and 89% year to date, respectively. Compare those returns to a company that has made a real visible turnaround that will be discussed in future business classes: Ford Motor Company (NYSE:F), which has returned only 15%. While long investments in Best Buy, Angie’s List, and RadioShack seem ridiculous, here are both sides of the argument on shorting Best Buy. 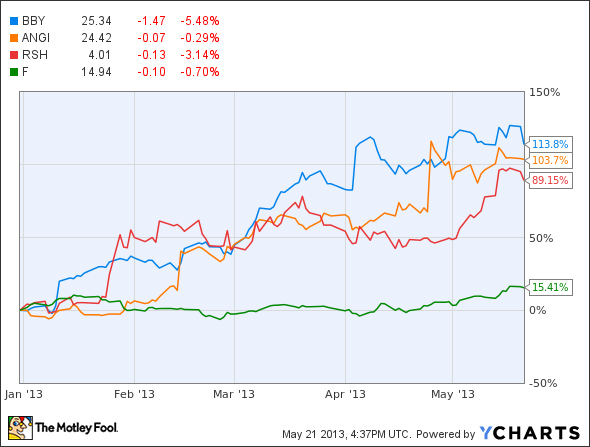 Bull/long argument
One reason there’s been hype from investors was last year’s hire of CEO Hubert Joly — a turnaround specialist — who quickly listed Best Buy Co., Inc. (NYSE:BBY)’s largest problems. An obvious problem was “showrooming,” where consumers browsed products in store with a more knowledgeable Best Buy staff and then proceeded to make the final purchase online for a cheaper price.

Best Buy Co., Inc. (NYSE:BBY) recently unleashed a price-matching policy that should give incentive for consumers to just make the final purchase in the store. It’s likely to be a good move to help stabilize same-store sales but will adversely impact already dwindling margins — we just don’t know how significantly yet.

A second reason for hype with investors is the move toward higher-margin products — away from fading low-margin DVDs and CDs. With an increased emphasis on big-ticket items such as appliances, smartphones, and tablets, shareholders are hoping to see improving margins and profits. I think there’s a huge caveat here, one that I’ll address in the bear/short argument.

Lastly, Best Buy Co., Inc. (NYSE:BBY)’s balance sheet is typically discussed in many bear arguments. According to The Wall Street Journal, Best Buy’s move to sell its stores in Europe back to Carphone Warehouse for roughly $775 million allowed it to improve its balance sheet — helping to alleviate one of shareholders’ biggest worries.

Is hiring a turnaround specialist who is attempting to reduce showrooming, increase emphasis on high-margin products, and shore up the balance sheet enough to justify Best Buy Co., Inc. (NYSE:BBY)’s rally? Will its focus on cost-cutting be enough? Here’s why it might not be.

Bear/short argument
Regarding that caveat I mentioned about Best Buy Co., Inc. (NYSE:BBY) emphasizing higher-margin products such as smartphones and tablets: Apple Inc. (NASDAQ:AAPL) has already had success creating a direct-to-consumer store for its products and has basically shown other competitors it can work.

How long will it be before Microsoft and/or Samsung make the exact same move? If and when they do, it will adversely affect Best Buy Co., Inc. (NYSE:BBY)in a couple of ways. Obviously, one is the increased competition for store traffic. Another more serious implication is the loss of pricing leverage, which Best Buy didn’t have much of to begin with.

As Apple Stores gain more traction and presence, it will eventually increase Apple’s margins enough that it can raise the price Best Buy must pay for its popular products. Best Buy Co., Inc. (NYSE:BBY) would then find itself between a rock and a hard place. It could either keep its margin intact and raise its retail price or eat it to stay competitive and watch profits decrease. It’s a lose-lose situation for Best Buy and it’s only a matter of time before Microsoft Corporation (NASDAQ:MSFT) and Samsung follow Apple in its direct-to-consumer approach.

That brings me to another point of significant worry for Best Buy profits: warranty sales. As each lost sale walks out the door, or never comes in to begin with, Best Buy not only loses the sale but its additional warranty sale. Consider that nearly a decade ago, according to Bloomberg, a healthier Best Buy was raking in profit margins on warranty contracts between 50% and 60% — nearly half of its operating income, analysts estimated. Best Buy simply paid a small fee to insurers and then pocketed the rest directly to the bottom-line profits — since products rarely needed replacement.