Is Shaw Communications Inc (NYSE:SJR) a buy, sell, or hold? Money managers are turning bullish. The number of bullish hedge fund positions improved by 3 recently. Our calculations also showed that SJR isn’t among the 30 most popular stocks among hedge funds.

What have hedge funds been doing with Shaw Communications Inc (NYSE:SJR)? 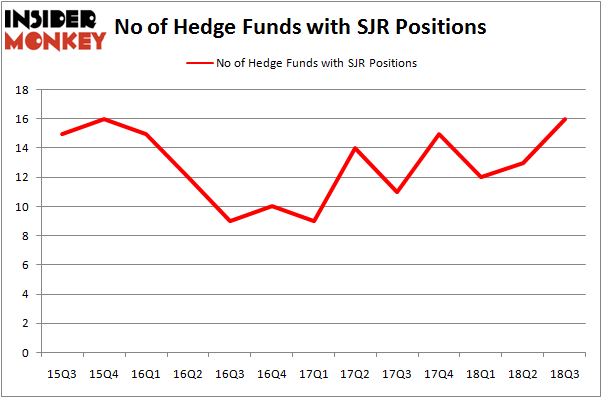 More specifically, Citadel Investment Group was the largest shareholder of Shaw Communications Inc (NYSE:SJR), with a stake worth $104.8 million reported as of the end of September. Trailing Citadel Investment Group was Renaissance Technologies, which amassed a stake valued at $43.6 million. AQR Capital Management, Two Sigma Advisors, and Bridgewater Associates were also very fond of the stock, giving the stock large weights in their portfolios.

As aggregate interest increased, some big names were breaking ground themselves. Signition LP, managed by George Zweig, Shane Haas and Ravi Chander, established the most outsized position in Shaw Communications Inc (NYSE:SJR). Signition LP had $0.4 million invested in the company at the end of the quarter. Alec Litowitz and Ross Laser’s Magnetar Capital also made a $0.3 million investment in the stock during the quarter. The only other fund with a brand new SJR position is David Andre and Astro Teller’s Cerebellum Capital.

As you can see these stocks had an average of 21.5 hedge funds with bullish positions and the average amount invested in these stocks was $314 million. That figure was $200 million in SJR’s case. Invesco Ltd. (NYSE:IVZ) is the most popular stock in this table. On the other hand China Lodging Group, Limited (NASDAQ:HTHT) is the least popular one with only 14 bullish hedge fund positions. Shaw Communications Inc (NYSE:SJR) is not the least popular stock in this group but hedge fund interest is still below average. This is a slightly negative signal and we’d rather spend our time researching stocks that hedge funds are piling on. In this regard IVZ might be a better candidate to consider a long position.