One of the cheapest stocks in our Large Cap 1000 – Deep Value Stock Screener is, WellCare Health Plans, Inc. (NYSE:WCG). 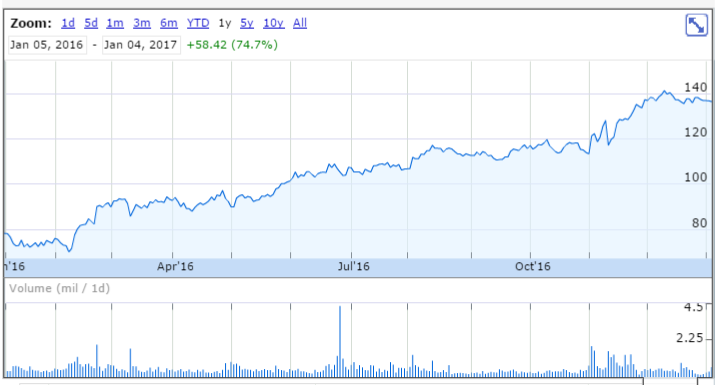 While the company’s share price has risen 75% over the past twelve months I believe the company still has more growth to come.

Where I see continued growth is in the company’s acquisitions of Phoenix Health Plan, Universal American, Care1st and Advicare Corp together with its solid track record of contract renewals. WellCare is a company that generates significant amounts of free cash-flow which means it can search and pay for accretive acquisitions that will help to grow its business. The company also has a significant amount of cash on its balance sheet and relatively low debt.

– In December, WellCare announced that had signed a definitive agreement to acquire certain assets, including Medicaid membership and certain provider contracts, from Phoenix Health Plan (PHP), a wholly owned managed care subsidiary of Tenet Healthcare. PHP provides health benefits primarily to more than 50,000 Medicaid beneficiaries as of December 1, 2016 in Maricopa County, Arizona, the state’s largest geographic service area. The transaction is expected to close by the second quarter of 2017, pending regulatory approvals, and is expected to be funded with available cash on hand.

– In November, WellCare announced that it had entered into a definitive agreement to acquire Universal American in an all cash transaction valued at $10.00 per share of common stock. The acquisition is expected to add approximately 65,000 Medicare Advantage (MA) members in a 4.5-Star plan in Houston–Beaumont, Texas and approximately 14,000 MA members in a 4.0-Star plan in the Northeast, primarily in New York, to the company’s Medicare Health Plans membership. In addition, Universal American partners with Accountable Care Organizations (ACO) in 11 states, six of which are WellCare Medicare Advantage markets.

– In June WellCare announced that it had completed the acquisition of certain assets of Advicare Corp.’s Medicaid business, which includes the transfer of approximately 30,000 members to WellCare of South Carolina. The financial terms of the transaction were not disclosed.