Seaspan Corporation (SSW): Are Hedge Funds Right About This Stock?

Is Seaspan Corporation ready to rally soon? Money managers are reducing their bets on the stock. The number of bullish hedge fund bets decreased by 3 lately. Our calculations also showed that SSW isn’t among the 30 most popular stocks among hedge funds. SSW was in 8 hedge funds’ portfolios at the end of September. There were 11 hedge funds in our database with SSW positions at the end of the previous quarter.

At the moment there are many gauges stock market investors put to use to grade stocks. A duo of the less known gauges are hedge fund and insider trading moves. Our researchers have shown that, historically, those who follow the best picks of the elite money managers can outclass their index-focused peers by a healthy amount (see the details here).

While collecting data for our write-up, we came across Miller Value Partners’ third-quarter 2018 letter to shareholders, that gives its opinion on Seaspan. The fund has a large position in the company and had this to say in the letter:

“During the quarter, Maiden Holdings (MHLD), Bed Bath and Beyond (BBBY), Seaspan Corp (SSW), Teva Pharmaceuticals (TEVA) and Genworth (GNW) were the largest detractors, albeit their overall drag on the performance was less than half of the top five contributors during the quarter.”

What does the smart money think about Seaspan Corporation (NYSE:SSW)? 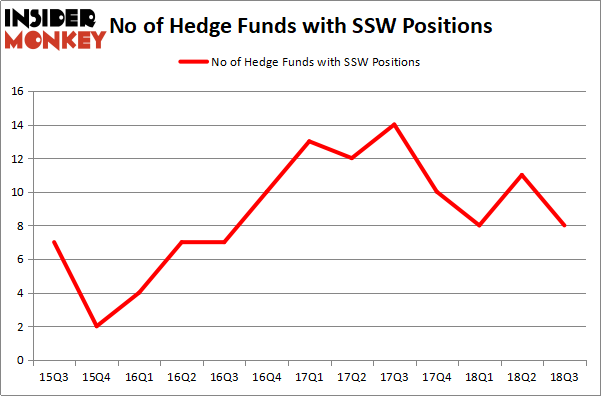 Among these funds, Fairfax Financial Holdings held the most valuable stake in Seaspan Corporation (NYSE:SSW), which was worth $321.5 million at the end of the third quarter. On the second spot was Brahman Capital which amassed $22 million worth of shares. Moreover, Renaissance Technologies, Two Sigma Advisors, and PEAK6 Capital Management were also bullish on Seaspan Corporation (NYSE:SSW), allocating a large percentage of their portfolios to this stock.

Because Seaspan Corporation (NYSE:SSW) has witnessed a decline in interest from hedge fund managers, logic holds that there exist a select few hedge funds that slashed their positions entirely in the third quarter. It’s worth mentioning that Richard Driehaus’ Driehaus Capital dumped the biggest investment of all the hedgies watched by Insider Monkey, valued at close to $7 million in stock, and Israel Englander’s Millennium Management was right behind this move, as the fund dumped about $0.4 million worth. These bearish behaviors are interesting, as total hedge fund interest was cut by 3 funds in the third quarter.

Let’s go over hedge fund activity in other stocks similar to Seaspan Corporation (NYSE:SSW). We will take a look at Tootsie Roll Industries, Inc. (NYSE:TR), 21Vianet Group Inc (NASDAQ:VNET), Alder Biopharmaceuticals Inc (NASDAQ:ALDR), and The Buckle, Inc. (NYSE:BKE). All of these stocks’ market caps are similar to SSW’s market cap.

As you can see these stocks had an average of 14 hedge funds with bullish positions and the average amount invested in these stocks was $123 million. That figure was $349 million in SSW’s case. Alder Biopharmaceuticals Inc (NASDAQ:ALDR) is the most popular stock in this table. On the other hand Tootsie Roll Industries, Inc. (NYSE:TR) is the least popular one with only 12 bullish hedge fund positions. Compared to these stocks Seaspan Corporation (NYSE:SSW) is even less popular than TR. Considering that hedge funds aren’t fond of this stock in relation to other companies analyzed in this article, it may be a good idea to analyze it in detail and understand why the smart money isn’t behind this stock. This isn’t necessarily bad news. Although it is possible that hedge funds may think the stock is overpriced and view the stock as a short candidate, they may not be very familiar with the bullish thesis. In either case more research is warranted.