It’s tough being a brick-and-mortar retailer. Unpredictable, adverse weather can keep shoppers from visiting, and can also cause retailers to stock up on the wrong seasonal products. Competition from e-commerce giants such as Amazon.com, Inc. (NASDAQ:AMZN) can drastically reduce store foot traffic.

The industry is also extremely broad, with wholesale retailers on one end, discount superstores in the middle and dollar stores on the other end. Each of these groups is constantly trying to outmaneuver the others, through bulk discounts, membership plans or strategic store placements. With all that maneuvering, certain companies are bound to be left behind. In this article, we’ll examine two retailers that investors should dump, and one that they should buy to profit in today’s rapidly shifting retail environment. 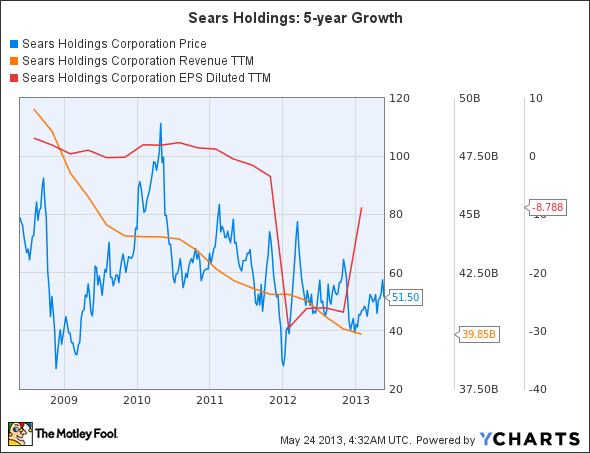 Sears has been stuck in a constant decline over the past five years. The only reason its top line bounced back over the past year was due to sales of real estate and other assets. Massive store closures, especially at Kmart, and tighter inventory controls have also helped. Yet Sears lacks the one thing it truly needs to bounce back – a viable plan to reverse seven consecutive years of declining same-store sales.

Therefore, it wasn’t surprising when Sears reported dismal first quarter earnings, in which the retailer reported a massive net loss of $2.63 per share, or $279 million, down from a profit of $1.78 per share, or $189 million, in the prior year quarter. That steep slide far exceeded the Thomson Reuters analysts’ consensus estimate for a loss of $0.60 per share. Revenue dropped 9% to $8.5 billion, also missing the analyst estimate of $8.74 billion.

Same-store sales decreased 3.6%. Sears attributed the slide to a cool spring, which caused lower sales of its seasonal products, such as spring clothing and outdoor merchandise. However, I believe that Sears’ problems run far deeper.

Increased competition from superstores such as Wal-Mart Stores, Inc. (NYSE:WMT) and Target Corporation (NYSE:TGT) on the lower end, department stores such as Macy’s, Inc. (NYSE:M) and Nordstrom, Inc. (NYSE:JWN) on the higher end, and e-commerce giants like Amazon.com, Inc. (NASDAQ:AMZN) and eBay Inc (NASDAQ:EBAY) on the direct-to-consumer front are Sears’ real challenges. There’s simply no room left in this crowded market for the laggards.

What’s more depressing is that Sears’ answer to these problems is the same old song. It plans to sell its protection agreement unit and reduce expenses by $200 million, with an ultimate goal to generate liquidity over $500 million. In other words, this company is a zombie retailer that is keeping warm by burning the furniture, and investors would be smart to avoid or sell this one.