Despite near-term economic uncertainties, I believe that in the long run growth in oil demand driven by emerging-market industrialization and rising wealth levels would provide for attractive returns in the well-positioned oil-services equities.

Rising wealth levels have a major bearing on per capita consumption of resources. Countries with 95% of the population earning more than $6,000 annually have per-capita oil consumption that is 12 times more compared to countries with less than 25% of the population earning that level of income. The number of people with annual income in excess of $6,000 (fixed) is expected to double over the next two decades.

The oil-services industry has the following medium-term growth drivers:

Oil services are grabbing an incremental share of gross GCI in the growing global oil industry – against oil producers and refiners. From 2005 through 2010, the share of oil services in total industry GCI increased from 8.6% in 2005 to 12.7% in 2010. More technological complexity will lead to higher margins.

An oversupply of natural gas and subsequent lower gas prices have led to reduced E&P investment allocations for North America in the near term. As a result, I prefer companies having greater exposure to regions outside of North America.

The following chart expresses the percentage contribution by operations outside of North America to gross revenue for major oil services companies: 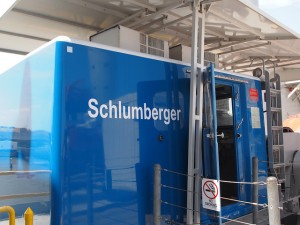 Compared to its peer group, Schlumberger Limited. (NYSE:SLB) is better positioned to benefit from higher growth (9%) in E&P investments outside of North America. The company derives 68% of its revenue from outside the region compared to an average of 49% for its peer set.

As international operations continue to grow in importance, Schlumberger is better positioned relative to its peers to benefit both from revenue growth and overall margin expansion.

Schlumberger Limited. (NYSE:SLB) is a leading provider of technology, integrated project management, and information solutions to the international oil-and-gas exploration & production industry. It employs more than 118,000 personnel at operations in more than 85 countries. The company reported 2012 revenue of $42.9 billion (14% y-o-y growth) and income before tax of $8.4 billion (15.2% y-o-y growth).

Schlumberger Limited. (NYSE:SLB) is the largest oil-services company globally; in addition, it has a more attractive growth profile compared to its peer set. It possesses the highest operating margin in the industry, as the company stands far ahead of its competition in terms of innovation and cost control.

The company is well diversified and a large proportion of its revenue is non-rig related. Furthermore, Schlumberger Limited. (NYSE:SLB) is best-positioned amongst its peers in international diversification, with 68% of revenue contribution stemming from operations outside North America. This leads to a reduced risk profile and an ability to yield stable returns.

However, if we consider the leverage for Schlumberger Limited. (NYSE:SLB), Halliburton Company (NYSE:HAL) and Baker Hughes Incorporated (NYSE:BHI), all three operate on a similar debt/equity ratio.