Hedge Funds and other institutional investors have just completed filing their 13Fs with the Securities and Exchange Commission, revealing their equity portfolios as of the end of June. At Insider Monkey, we follow nearly 750 active hedge funds and notable investors and by analyzing their 13F filings, we can determine the stocks that they are collectively bullish on. One of their picks is Johnson & Johnson (NYSE:JNJ), so let’s take a closer look at the sentiment that surrounds it in the current quarter.

Johnson & Johnson (NYSE:JNJ) investors should pay attention to an increase in support from the world’s most elite money managers of late. JNJ was in 76 hedge funds’ portfolios at the end of September. There were 63 hedge funds in our database with JNJ positions at the end of the previous quarter. Our calculations also showed that JNJ ranked 27th among the 30 most popular stocks among hedge funds.

In today’s marketplace there are a multitude of indicators investors use to assess their stock investments. A duo of the best indicators are hedge fund and insider trading sentiment. Our researchers have shown that, historically, those who follow the top picks of the best investment managers can outperform the broader indices by a superb amount (see the details here).

Unlike the largest US hedge funds that are convinced Dow will soar past 40,000 or the world’s most bearish hedge fund that’s more convinced than ever that a crash is coming, our long-short investment strategy doesn’t rely on bull or bear markets to deliver double digit returns. We only rely on the best performing hedge funds‘ buy/sell signals. We’re going to review the new hedge fund action regarding Johnson & Johnson (NYSE:JNJ). 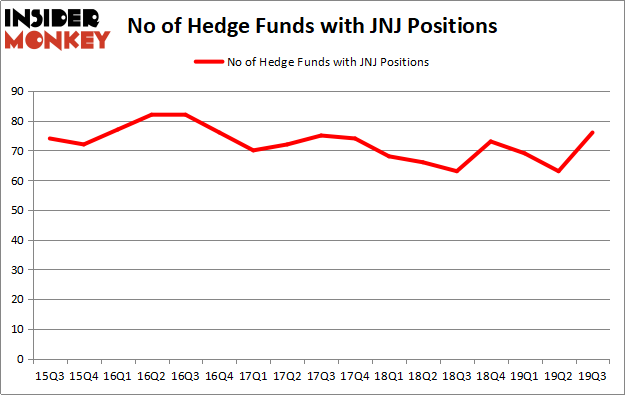 Among these funds, Fisher Asset Management held the most valuable stake in Johnson & Johnson (NYSE:JNJ), which was worth $1563.1 million at the end of the third quarter. On the second spot was D E Shaw which amassed $965.1 million worth of shares. AQR Capital Management, Renaissance Technologies, and Yacktman Asset Management were also very fond of the stock, becoming one of the largest hedge fund holders of the company. In terms of the portfolio weights assigned to each position Yacktman Asset Management allocated the biggest weight to Johnson & Johnson (NYSE:JNJ), around 7.34% of its portfolio. Sio Capital is also relatively very bullish on the stock, setting aside 5.99 percent of its 13F equity portfolio to JNJ.

As industrywide interest jumped, specific money managers were leading the bulls’ herd. Senator Investment Group, managed by Doug Silverman and Alexander Klabin, initiated the most outsized position in Johnson & Johnson (NYSE:JNJ). Senator Investment Group had $113.9 million invested in the company at the end of the quarter. Paul Marshall and Ian Wace’s Marshall Wace also initiated a $89.1 million position during the quarter. The other funds with new positions in the stock are Arthur B Cohen and Joseph Healey’s Healthcor Management, Anand Parekh’s Alyeska Investment Group, and Michael Castor’s Sio Capital.

As you can see these stocks had an average of 43.5 hedge funds with bullish positions and the average amount invested in these stocks was $5079 million. That figure was $7327 million in JNJ’s case. The Procter & Gamble Company (NYSE:PG) is the most popular stock in this table. On the other hand Nestle SA (OTCMKTS:NSRGY) is the least popular one with only 4 bullish hedge fund positions. Compared to these stocks Johnson & Johnson (NYSE:JNJ) is more popular among hedge funds. Our calculations showed that top 20 most popular stocks among hedge funds returned 34.7% in 2019 through November 22nd and outperformed the S&P 500 ETF (SPY) by 8.5 percentage points. Hedge funds were also right about betting on JNJ, though not to the same extent, as the stock returned 6.7% during the fourth quarter (through 11/22) and outperformed the market as well.