The government requires hedge funds and wealthy investors with over a certain portfolio size to file a report that shows their positions at the end of every quarter. Even though it isn’t the intention, these filings level the playing field for ordinary investors. The latest round of 13F filings disclosed the funds’ positions on September 30. We at Insider Monkey have made an extensive database of more than 700 of those elite funds and prominent investors’ filings. In this article, we analyze how these elite funds and prominent investors traded Savara, Inc. (NASDAQ:SVRA) based on those filings.

Is Savara, Inc. (NASDAQ:SVRA) a worthy investment today? Money managers are becoming hopeful. The number of bullish hedge fund positions moved up by 4 lately. Our calculations also showed that SVRA isn’t among the 30 most popular stocks among hedge funds.

What does the smart money think about Savara, Inc. (NASDAQ:SVRA)?

At the end of the third quarter, a total of 13 of the hedge funds tracked by Insider Monkey were bullish on this stock, a change of 44% from the second quarter of 2018. On the other hand, there were a total of 9 hedge funds with a bullish position in SVRA at the beginning of this year. With hedge funds’ sentiment swirling, there exists a few key hedge fund managers who were upping their stakes substantially (or already accumulated large positions). 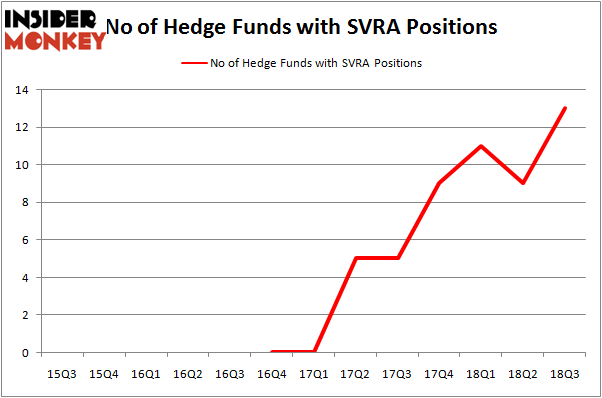 The largest stake in Savara, Inc. (NASDAQ:SVRA) was held by Consonance Capital Management, which reported holding $34.5 million worth of stock at the end of September. It was followed by Farallon Capital with a $27 million position. Other investors bullish on the company included Great Point Partners, Sectoral Asset Management, and Point72 Asset Management.

As one would reasonably expect, key money managers have been driving this bullishness. Point72 Asset Management, managed by Steve Cohen, initiated the most valuable position in Savara, Inc. (NASDAQ:SVRA). Point72 Asset Management had $8 million invested in the company at the end of the quarter. James E. Flynn’s Deerfield Management also initiated a $2.8 million position during the quarter. The following funds were also among the new SVRA investors: Nathaniel August’s Mangrove Partners, Louis Bacon’s Moore Global Investments, and Ori Hershkovitz’s Nexthera Capital.

As you can see these stocks had an average of 13 hedge funds with bullish positions and the average amount invested in these stocks was $57 million. That figure was $118 million in SVRA’s case. New Frontier Corp (NYSE:NFC) is the most popular stock in this table. On the other hand Southern National Bancorp of Virginia, Inc. (NASDAQ:SONA) is the least popular one with only 7 bullish hedge fund positions. Savara, Inc. (NASDAQ:SVRA) is not the least popular stock in this group but hedge fund interest is still below average. This is a slightly negative signal and we’d rather spend our time researching stocks that hedge funds are piling on. In this regard NFC might be a better candidate to consider a long position.