As an investor you’re likely keenly aware of the fact that plunking down your hard-earned money for a sliver of ownership in a company involves risk. The amount you’re investing for your share of the company could decrease in value significantly, and a worst case scenario could lead to your investment becoming worthless. That’s why it’s so important to consider what could go wrong ahead of time so you have an idea of what to watch out for as you hold your position.

That’s why I love the quote by Carl Richards in which he reminds us that “[risk] is what’s left over when you think you’ve thought of everything else.” All too often we only look at what could go right and typically don’t dig too deeply into what could go wrong. Instead of being reminded that the real risk is something we are not considering, all too often we are blindsided by a risk that was hiding in plain sight.

If you are like most investors, you have some sort of energy exposure in your portfolio. You’re well aware that oil and gas prices are volatile — I think most of us would label that as risk No. 1 when investing in an energy company. When listing what might go wrong you’ve likely thought about the environmental risks or the geopolitical risks, but I’d be willing to bet that few investors have ever considered the role that related party transactions can play in poor investment returns.

Sure, we probably all know the story of Chesapeake Energy Corporation (NYSE:CHK)‘s former CEO Aubrey McClendon. From the Founder’s Well Program to a sale of an antique map collection, there were several instances where the company was engaged in questionable, related-party transactions with its CEO. Yet, if natural gas prices had never collapsed then none of these questionable activities would likely have mattered to investors. Unfortunately, the risk that was missed is that McClendon’s attention was not always on the company; in hindsight investors might have realized that all these related-party transactions might not have been in the best interests of all stakeholders.

The problems with related-party transactions don’t end with Chesapeake Energy Corporation (NYSE:CHK). Another one of its co-founders, Tom Ward, has more recently been questioned by investors for his dealings with the company he now leads: SandRidge Energy Inc. (NYSE:SD). At the behest of activist investors, the company has hired an independent firm to review an assortment of related-party transactions between Ward, his family, and SandRidge Energy Inc. (NYSE:SD). If the newly expanded board doesn’t like what it finds, Ward could be removed as CEO at the end of next month.

Now it should be noted that Hamm owns 68% of Continental Resources, Inc. (NYSE:CLR)’s outstanding shares so his interests appear to be well-aligned with outside investors. Though, I will point out that both Ward and McClendon owned big stakes in their respective companies as well. The reason investors have an issue with the dealings of Ward and McClendon can best be explained by the following chart: 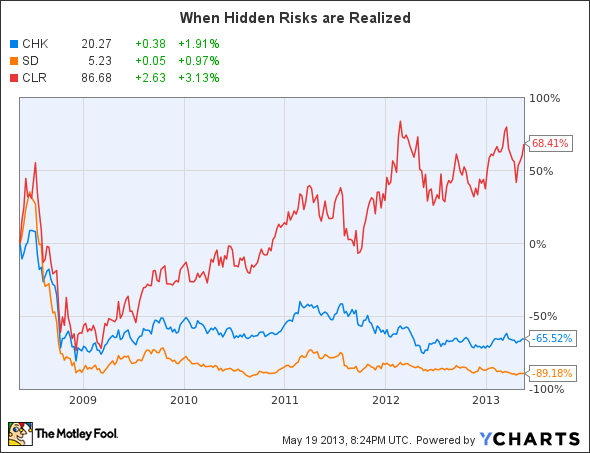