The government requires hedge funds and wealthy investors with over a certain portfolio size to file a report that shows their positions at the end of every quarter. Even though it isn’t the intention, these filings level the playing field for ordinary investors. The latest round of 13F filings discloses the funds’ positions on June 30. We at Insider Monkey have made an extensive database of more than 700 of those elite funds and prominent investors’ filings. In this article, we analyze how these elite funds and prominent investors traded Royal Dutch Shell plc (ADR) (NYSE:RDS) based on those filings.

The number of hedge fund shareholders of Royal Dutch Shell plc (ADR) (NYSE:RDS) from among those tracked by Insider Monkey’s database rose to a 52-week high as of the midpoint of 2018. 39 hedge funds were long the stock at that time, 27% higher than a year earlier. RDS shares already boast a 6% dividend yield, which ranked them in the top 10 among the 25 Dividend Stocks that Billionaire Ken Fisher is Bullish On, but could be in line for another raise soon, along with the oil major’s commitment to buy back $25 billion worth of shares by the end of 2020.

At the end of the third quarter, a total of 39 of the hedge funds tracked by Insider Monkey were bullish on this stock, a lift of 8% from the previous quarter. By comparison, just 30 hedge funds held shares or bullish call options in RDS in the middle of 2017. With the smart money’s sentiment swirling, there exists a few noteworthy hedge fund managers who were boosting their stakes meaningfully (or already accumulated large positions). 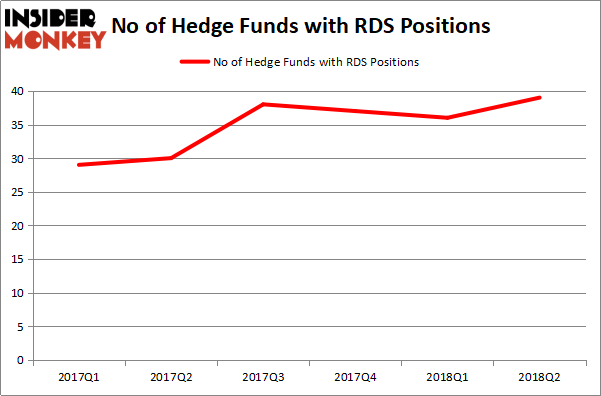 Of the funds tracked by Insider Monkey, Peter Rathjens, Bruce Clarke and John Campbell’s Arrowstreet Capital has the most valuable position in Royal Dutch Shell plc (ADR) (NYSE:RDS), worth close to $490.6 million, accounting for 1.2% of its total 13F portfolio. The second-largest stake is held by Pzena Investment Management, managed by Richard S. Pzena, which holds a $415.8 million position; the fund has 2.1% of its 13F portfolio invested in the stock. Remaining members of the smart money that are bullish encompass Nigel Greig and Kenneth Cowin’s Pittencrieff Partners – Gabalex Capital, Till Bechtolsheimer’s Arosa Capital Management and Ernest Chow and Jonathan Howe’s Sensato Capital Management.

As you can see these stocks had an average of 86 hedge funds with bullish positions and the average amount invested in these stocks was $19.05 billion. That figure was $2.33 billion in RDS’s case. Visa Inc (NYSE:V) is the most popular stock in this table. On the other hand Wal-Mart Stores, Inc. (NYSE:WMT) is the least popular one with only 52 bullish hedge fund positions. Compared to these stocks Royal Dutch Shell plc (ADR) (NYSE:RDS) is even less popular than WMT. Considering that hedge funds aren’t fond of this stock in relation to other companies analyzed in this article, it may be a good idea to analyze it in detail and understand why the smart money isn’t behind this stock.