We’re still a few years away from LNG exports in the U.S., but the LNG game is ramping up all over the world. There are immense opportunities to profit from this venture, but it’s going to be an extremely competitive sector in the future. Let’s look at what we could expect from LNG in the future and who could come out on top.

Lay of the land
Natural gas is an interesting creature. Unlike its other commodity cousins oil and coal, moving natural gas from one place to another is exceedingly difficult. The process to liquefy and transport natural gas makes means that prices can vary wildly based on geographic location. That’s why so many companies are looking to take advantage of this situation. 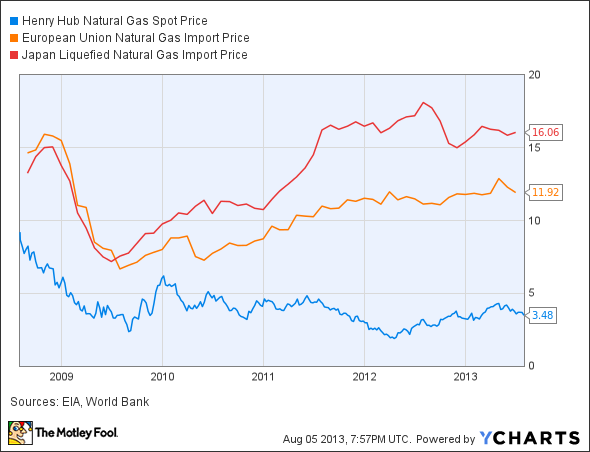 At the same time, the market for natural gas exporting is poised to become a very competitive space. According to Wolfgang Moehler at IHS, there is a need for 60 million to 80 million tons of additional LNG capacity between now and 2020, but there are proposals for 250 million tons of LNG export capacity in the U.S. alone. What this means is that there are a lot of facilities that will probably never see the light of day. Meaning that companies that want to make major inroads in this market will need to move quickly and have big checkbooks to cover the costs of these expensive projects.

The candidates
Royal Dutch Shell plc (ADR) (NYSE:RDS.A): Of all the publicly traded major oil and gas companies out there, Royal Dutch Shell plc (ADR) (NYSE:RDS.A) has quite possibly the most expansive existing LNG infrastructure. The company has a working interest in eight existing LNG export terminals located in the Middle East, Nigeria, and Southeast Asia and owns or operates 56 LNG vessels, all combining to export about 20 million tons of LNG per year. This represents about 8.5% of all global LNG trade.

Going forward, Royal Dutch Shell plc (ADR) (NYSE:RDS.A) has equity interests in three Australian LNG projects under construction, as well as proposals to build facilities in the U.S. and Canada, which all told would add another 18.5 million tons to its existing export capacity. But probably the biggest wild card for Royal Dutch Shell plc (ADR) (NYSE:RDS.A) is its floating LNG technology. If its floating facilities can prove to be economical, it could be a major player in some of the emerging natural gas plays such as East Africa, where there is very little existing offshore infrastructure for LNG.