Over the past decade, the emergence of shale fracking has unlocked a natural gas bonanza in the United States. Production has exploded, and prices have fallen so low that natural gas fuel, chemical production, and even exports have become economic possibilities. But what’s the best path forward?

We asked four of our top energy analysts what policy the U.S. should encourage to exploit this natural resource. Here’s what they thought. 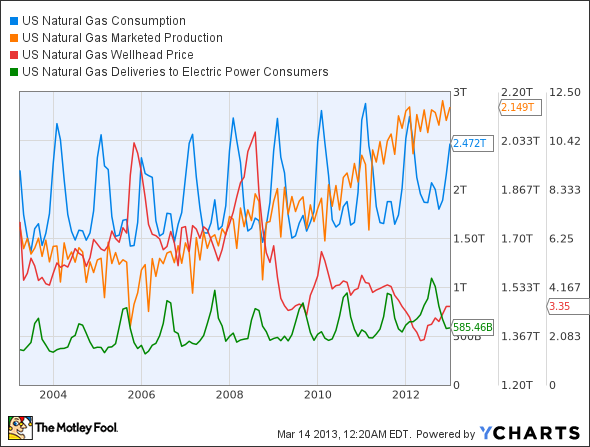 Even with the growth of natural gas in electricity generation, we’re simply not consuming enough natural gas domestically to make a dent in the potential production windfall. Production would be even higher in 2012, but prices have been so low that driller all but stopped drilling for natural gas, choosing to drill for oil instead.

If we’re going to make a significant impact on the economy, we need to begin exporting natural gas to countries that could use the low-cost fuel. The Federal Energy Regulatory Commission recently published its estimates for March 2013 landed prices of liquefied natural gas. Here are a few of the notable prices.

Since energy is all about supply and demand, you can see we have a world of demand at our fingertips. From a supply side, prices in the U.S. are as low as they are because we have too much production, which I mentioned has been cut back dramatically over the past year.

We should open up export markets, which would increase production, raise prices to sustainable levels, and increase exports, which are all good for the U.S. economy.

Maxx Chatsko’s take
Rather than comparing domestic LNG export capacity with that of world leaders Qatar and Australia, investors should be comparing domestic cracker capacity. What does a cracker facility do? Crackers take ethane and methane found in natural gas and convert them into high-value products, such as ethylene and polyethylene, that are used in plastics and chemical derivatives. Both countries have worked hard to cultivate their manufacturing advantage — maybe a little too successfully. Countries in the Middle East, which has the lowest ethane prices in the world, have essentially run out of additional ethane supply and are now turning to more expensive feedstocks such as naphtha, propane, and butane.

This creates a massive opportunity for American companies, which are wasting no time getting started. Royal Dutch Shell plc (ADR) (RDS.A) recently chose a site just outside Pittsburgh for a potential world-scale ethane cracker facility in the heart of the Marcellus Shale that will produce more than 1 million tons of polyethylene per year. The chemical serves as a building block for everyday items such as packaging materials, artificial joints, bulletproof vests, and water pipes. See the long-term possibilities for a revitalized manufacturing base yet?

LNG exports will provide an important trade capability for the United States, but turning natural gas into value-added products adds a layer of security from worldwide pricing volatility. It could also have a tremendous effect on the economy by providing jobs and domestically produced products. In fact, one report estimated that the planned Shell plant will create up to 8,200 permanent jobs in the surrounding region and that the number could soar as high as 20,000 if manufacturing plants spring up to take advantage. If that happened, more than than 1 in 10 people of the total population would be supported indirectly by Shell’s presence. Therefore, restricting LNG exports is the best possible move for a more competitive America.