Several of the more fashionable restaurant stocks have been phenomenal investments during the recent cyclical bull market.  Investors in these stocks have been aided by the powerful trifecta of positive same store sales, increasing operating margins, and strong new store growth.  However, at least two of these tailwinds have a finite life and this does not take into account any operational missteps regarding same-store sales growth.  Below are four risks that make owning restaurant stocks at today’s lofty valuation a dangerous proposition.

Risk 1:  Operating Margin Expansion is in the Final Innings

The massive expansion in operating margins is evidenced in the chart below. 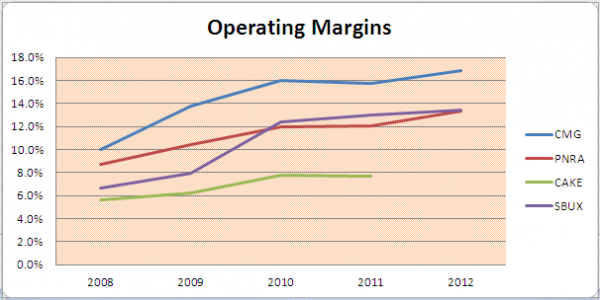 These don’t have to collapse for consensus bullish estimates to fall short.  Panera Bread Co (NASDAQ:PNRA) has moved operating margins from 8.7% to 13.3% in just five years.  This has helped fuel five consecutive years of at least 20% earnings-per-share growth.  The outlook according to their 2013 guidance is FLAT TO UP 50 BASIS POINTS.  Simply put, operating margin expansion will slow considerably in upcoming years.

Chipotle Mexican Grill, Inc. (NYSE:CMG) leads most restaurant peers with 16% margins whereas many others, both growing and mature, reside in the 8-16% range.  While Chipotle’s margins improved during 2012, they contracted in the fourth quarter due to rising food costs.  It remains difficult to see how the company will be able to generate the operating leverage that fueled substantial EPS growth and a 58% annual return over the last four years.

This chart shows quarterly same-store sales since the first quarter of 2009.

Several things are apparent in this chart.  First, the +10% SSS growth that Chipotle Mexican Grill enjoyed clearly couldn’t persist.  It was amazing that they were able to do it for seven consecutive quarters.  That sent the stock soaring to $440 per share.  Investors should have realized that lapping these superb growth numbers made continual double-digit growth impossible.  This is exactly what happened and the stock now resides more than 25% below its 2012 high.

Second, Starbucks Corporation (NASDAQ:SBUX) is in a similar spot having put in nine consecutive quarters of at least 7% same-store sales growth before dipping ever so slightly in the last several quarters.  The company has demonstrated a wonderful operational turnaround with brand extensions and expanded menu offerings.  Can they keep this up?

This has been the third leg to Chipotle’s superb earnings-per-share growth story.  But can it persist?  They are forecasting new store growth of around 12% in fiscal 2013 which would be lower than recent results.  Their store count now stands at 1410, the same spot that Panera Bread (NASDAQ:PNRA) sat during 2010.  Panera Bread now has just over 1600 stores.  Will Chipotle’s new store count mirror that of Panera Bread after they reached 1400 stores?  If so, then new store count will start to drift from 18% to 12% to 6% relatively quickly.

Should You Leave Room for Chipotle Mexican Grill Inc. (CMG) in Your Portfolio...