Research In Motion Ltd (BBRY): Transitional Phase for The Company?

A few days ago, I had written about the possibility of old emperors, like Nokia Corporation (ADR) (NYSE:NOK) and Research In Motion Ltd (NASDAQ:BBRY), striking back in the smartphone war. Well, to everyone’s surprise, BlackBerry’s recent earnings report showed signs of the company’s resuscitation after a long period of dull performance. 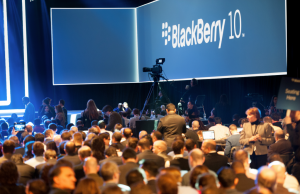 However, the company reported a net loss of $646 million for the full fiscal year. It had initiated a cost-cutting program for the fourth quarter, which included laying off 5,000 employees to save $1 billion, which is one of the reasons for the quarterly profit.

The subscriber-base decreased to 76 million. However, I believe the company could well be entering a transitional phase, reasons for which include the following.

Even though the company doesn’t currently pay dividends to its shareholders, Research In Motion Ltd (NASDAQ:BBRY)’s strong balance sheet has been acting as a cushion for investors. With negligible current long-term debt, the company also has $2.9 billion in cash, cash equivalents and marketable investments–which represents around 36% of the company’s total market capitalization of $8.1 billion.

With the recent launch of Research In Motion Ltd (NASDAQ:BBRY)’s Z10 smartphones, the company has plans to launch a series of smartphones to cater the needs of all types of consumers. It has also has plans to release a tablet in the fall. In an interview with The Canadian Press, BlackBerry chief executive Thorsten Heins said:  “In order to stay relevant, we have to build a portfolio.”

The smartphones, which have yet to be released, will have three tiers: devices for high-end users as well as variations on those products with mid-and-entry level prices to cater to the needs of low-budget consumers.

With the introduction of low-priced smartphones, which will also use the BlackBerry 10 operating software, the company aims to gain market share in countries like India and is encouraging its customers to shift to its new operating software at affordable prices. It’s also working on introducing new features in addition to its world famous BlackBerry Messenger (BBM), which could also increase its revenue.

After seeing a low of $6 per share in September 2012 and rallying around that price range for quite sometime, Research In Motion Ltd (NASDAQ:BBRY)’s shares have at least bounced back to a double- digit figures. Shares have recently been trading at about $15.12 per share. Even though the shares are nowhere close to the $90 per share-high the stock had attained , the double-digit share price is definitely a sign of a comeback. The following chart shows the stock performance.

Even though there are reasons for investors to cheer, there are a few concerns about this company, as well. One of the main reasons for worry has been Research In Motion Ltd (NASDAQ:BBRY)’s declining sales. Fourth quarter revenue was approximately $2.6 billion vs. a $2.7 billion in the same period a year ago. Annual revenue declined by 40% to $11 billion vs. $18.4 billion a year earlier. The declining sales have been a huge worry for the company and the hits continue. After ruling the smartphone market for quite sometime, BlackBerry has been losing its market share to both Apple Inc. (NASDAQ:AAPL) and Samsung.

The following table shows the operating-system share in the smartphone market:

Blackberry Market Share: Will Research In Motion Follow Nokia Downhill in this...Apple Inc. (AAPL): Can Its iPhone Sales Hold Up This Quarter?Research In Motion Ltd (BBRY): Is This Stock Destined for Greatness?
Monthly Newsletter Strategy
Download a free copy of our newsletter and see the details inside!
Hedge Fund Resource Center
Billionaire Hedge Funds