Research In Motion Ltd (BBRY): How Much Can You Really Smash Your BlackBerry?

Research In Motion Ltd (NASDAQ:BBRY), aka BlackBerry, aka the “Comeback Kid” has had an interesting week. From being speculated as a takeover target for larger tech titans like Nokia Corporation (ADR) (NYSE:NOK) or Microsoft Corporation (NASDAQ:MSFT), to reporting its fiscal 2013 results, shareholders’ news feeds have been working overtime.

So it’s surprising, then, when an interesting bit of “news” about the company’s newest smartphone–the Z10–goes relatively unnoticed.

It’s called the Drop Test, and for this one, it’s performed by the folks at Mashable. Just how it sounds, a Drop Test pits various smartphones, from the likes of Apple Inc. (NASDAQ:AAPL), Nokia, and others, and some have even been performed from space. That’s not a typo.

Anyway, although Mashable’s test video on YouTube has close to 150K views, we thought it deserved far more love than it has gotten. Their team pits Research In Motion Ltd (NASDAQ:BBRY)’s Z10 against its worst enemy–gravity. Here’s our recap of each round of testing.

At first glance, most readers would probably assume that a smartphone falling on carpet couldn’t possibly do much damage to the device. The real dangers are when you’re outside, on a bike, or piloting a one-man sailboat right? 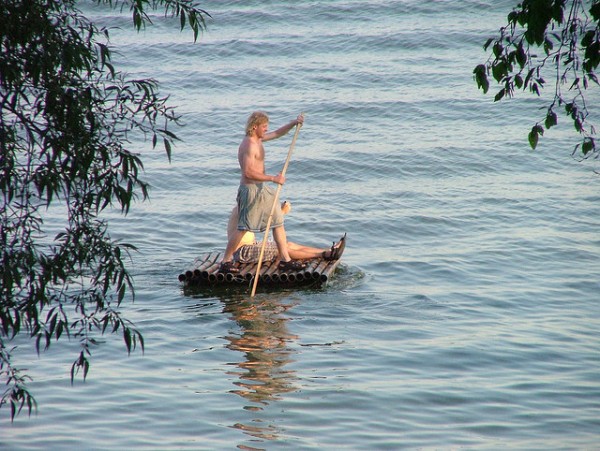 A photo of a two-man homemade raft was the closet thing we could find….but same thing.

In all seriousness though, it’s reasonable to expect that a 5 foot drop onto your mother’s tufted carpet wouldn’t leave a scratch. That’s what happened, but the Z10 did sound like a brick hitting the floor. Don’t take our word for it, watch the vide0 on the next page.

Still, Research In Motion Ltd (NASDAQ:BBRY)’s smartphone survives round one without a scratch, albeit a minor pop of its back panel, which isn’t anything to worry about.

If you thought carpet was intense, let’s move onto the video’s second round: WOOD. It’s reasonable to expect that the fibrous structural tissue would have a beef with smartphones, because, you know, some may argue that they keep users from fully enjoying the great outdoors (seriously).

Still, like the stalwart that it is, the Z10 survives.

Research In Motion Ltd (NASDAQ:BBRY) is really up against its true enemy here–aside from Apple or Nokia of course: paved ground. The third round of Mashable’s Drop Test does what all Z10 users hope to avoid: an errant throw/chuck/sweaty hand-caused fall while in an urban environment. Judging by the video above, this is where users could begin to see issues if they’re holding it high enough.

At the conclusion of the test…..

Samsung Electronics Competitors: A Look Inside the Samsung Empire – Should...Apple Inc. (AAPL), Google Inc (GOOG): Why Gay Marriage Could Be Good for Investors...Research In Motion Ltd (BBRY) Races Ahead and Then Stalls Out. Is BB10 a Hit...