It’s hard to find any investors who are bullish on GPS manufacturer Garmin Ltd. (NASDAQ:GRMN) these days. Garmin, which once dominated the market for dedicated GPS devices, has seen its market share crumble over the past five years ever since smartphones took center stage. Since late 2007, Garmin has lost over 70% of its market value, as the company struggled to keep its technology relevant. However, the company refuses to throw down the towel, and continues to produce a wide variety of products aimed at preserving its share of the GPS market. Can these efforts succeed, or is Garmin merely postponing its inevitable demise?

Before we check out Garmin Ltd. (NASDAQ:GRMN)’s upcoming devices, we should see how the company has fared financially. Last quarter, Garmin’s revenue declined 4.4% year-on-year to $532 million, and its adjusted earnings fell 11.11% to $0.40 per share. The company topped analyst estimates on the top-line but missed on the bottom-line. However, the company managed to decrease its advertising and SG&A (selling, general and administrative) expenses significantly, although operating expenses rose. 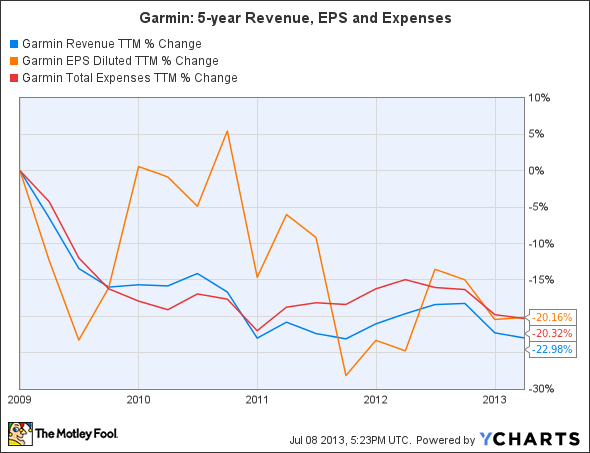 From this chart, we can see that although expenses have declined considerably, but they are decreasing in line with the shrinkage of its top and bottom lines. In other words, Garmin Ltd. (NASDAQ:GRMN) is still getting smaller, albeit in a controlled, step-by-step manner. Sales of its bread and butter PNDs (personal navigation devices) slumped 8% from the prior year quarter to 2.5 million units. By comparison, 216.2 million smartphones were shipped in the first quarter of 2013, according to NPD.

Garmin Ltd. (NASDAQ:GRMN)’s direct competitors, TomTom and Magellan, haven’t fared much better. Over the past five years, shares of TomTom, headquartered in Amsterdam, have declined 74%. Meanwhile, Magellan is now a subsidiary of Taiwanese company MiTAC, which also produces Mio PNDs. Shares of MiTAC have fallen nearly 50% over the past five years, which indicates that all of these hardware GPS manufacturers are stuck in the same sinking boat.

Garmin Ltd. (NASDAQ:GRMN)’s first line of defense was to produce its own Microsoft Corporation (NASDAQ:MSFT) Windows Mobile and Google Inc (NASDAQ:GOOG) Android smartphones, with the help of Taiwanese PC manufacturer Asus. Between 2009 and 2011, Garmin released six Garmin Nüvifones, which ran on Windows Mobile 6.1 to 6.53 and Android 1.6. This brand eventually evolved into the Garminfone, a low-end Android device that has failed to find an audience due to its lackluster specs and clunky design.

Google Maps, which is tightly integrated into both iOS and Android, is simply a better choice for most smartphone users, since Google Inc (NASDAQ:GOOG)’s location-based rating services are increasingly powered by crowdsourced reviews and data. Google’s recent purchase of popular crowdsourced map company Waze, which has 47 million active users, confirms that Google intends to be the de facto map service across mobile devices, completely replacing the need for PNDs. For most users, an average experience with Google Maps is also more seamless than the jarring transition to an old-fashioned GPS interface that Garmin Ltd. (NASDAQ:GRMN)’s phones and apps provide.

And a third half-baked idea

Since those two ideas didn’t quite pan out, Garmin Ltd. (NASDAQ:GRMN) recently came up with another bizarre idea – a heads-up display (HUD) for cars that costs $130. The product replicates a popular feature in higher-end cars, where basic navigation data is directly reflected onto a transparent film attached to the windshield. The data includes the current speed, the local speed limit, and upcoming turns to the destination. The hardware synchronizes to a Bluetooth-enabled smartphone running Garmin’s StreetPilot and Navigon applications on Android, iOS or Windows Phone 8, and directly projects the data onto the windshield.

Although that idea sounds marketable to drivers who think that looking down at a smartphone GPS while driving is dangerous, a simple smartphone mount, which costs approximately $20, could solve that dilemma quite easily. In addition, many vehicles already offer Bluetooth-synchronized connections to smartphones. Garmin Ltd. (NASDAQ:GRMN) recently signed a deal with Mercedes-Benz to bring similar technology to its vehicles. This means that with the HUD, Garmin could be producing yet another redundant piece of hardware that could be dead on arrival.

Garmin Ltd. (NASDAQ:GRMN) reported a 10% slide in its auto and mobile PND business segment last quarter, and projects a 20% decline in global sales volume in the sector, and it seems unlikely that its new HUD product will do much to turn around the business. Those businesses currently account for nearly half of Garmin’s top-line.

Finding strength in other niche sectors