Our extensive research has shown that imitating the smart money can generate significant returns for retail investors, which is why we track more than 700 prominent money managers and analyze their quarterly 13F filings. The stocks that are heavily bought by hedge funds historically outperformed the market, though there is no shortage of high profile failures like hedge funds’ recent losses in Facebook. Let’s take a closer look at what the funds we track think about Republic Services, Inc. (NYSE:RSG) in this article.

Republic Services, Inc. (NYSE:RSG) investors should be aware of an increase in hedge fund interest in recent months. RSG was in 26 hedge funds’ portfolios at the end of the third quarter of 2018. There were 22 hedge funds in our database with RSG holdings at the end of the previous quarter. Our calculations also showed that rsg isn’t among the 30 most popular stocks among hedge funds.

What have hedge funds been doing with Republic Services, Inc. (NYSE:RSG)? 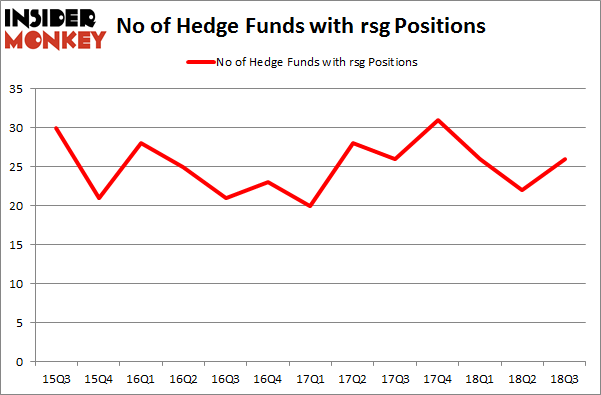 The largest stake in Republic Services, Inc. (NYSE:RSG) was held by GAMCO Investors, which reported holding $144 million worth of stock at the end of September. It was followed by AQR Capital Management with a $141 million position. Other investors bullish on the company included Two Sigma Advisors, Renaissance Technologies, and Chilton Investment Company.

With a general bullishness amongst the heavyweights, key money managers have jumped into Republic Services, Inc. (NYSE:RSG) headfirst. Signition LP, managed by George Zweig, Shane Haas and Ravi Chander, established the most outsized position in Republic Services, Inc. (NYSE:RSG). Signition LP had $0.5 million invested in the company at the end of the quarter. Bruce Kovner’s Caxton Associates LP also made a $0.3 million investment in the stock during the quarter. The other funds with new positions in the stock are Ray Dalio’s Bridgewater Associates, Alec Litowitz and Ross Laser’s Magnetar Capital, and David Andre and Astro Teller’s Cerebellum Capital.

As you can see these stocks had an average of 21.75 hedge funds with bullish positions and the average amount invested in these stocks was $1.16 billion. That figure was $611 million in RSG’s case. Andeavor (NYSE:ANDV) is the most popular stock in this table. On the other hand Wipro Limited (NYSE:WIT) is the least popular one with only 8 bullish hedge fund positions. Republic Services, Inc. (NYSE:RSG) is not the most popular stock in this group but hedge fund interest is still above average. This is a slightly positive signal but we’d rather spend our time researching stocks that hedge funds are piling on. In this regard ANDV might be a better candidate to consider a long position.