Shares of Republic Airways Holdings Inc. (NASDAQ:RJET) performed very well in the first three months of 2013, nearly doubling during that time period. Investors were cheered by improvements in the company’s core regional carrier operation, under which it operates flights for all four of the big U.S. network carriers.

However, Republic Airways Holdings Inc. (NASDAQ:RJET)’s decision to sell or spin off its Frontier Airlines subsidiary was an even bigger positive catalyst. The company is working hard on transforming Frontier into an ultra-low cost carrier, similar to Spirit Airlines Incorporated (NASDAQ:SAVE), but that project will take years to fully pay off. Moreover, there are few synergies between Frontier and the core regional airline business. As a result, spinning off Frontier — or selling it to a third party — could create plenty of value for shareholders.

Unfortunately, the separation process has dragged on a good deal longer than expected. Last summer, Republic Airways Holdings Inc. (NASDAQ:RJET) executives told investors that they expected to sell or spin off Frontier by mid-2013. As days and weeks have gone by with no announcement about whether such a transaction will be completed, the stock has started to come under pressure. However, I would view this as a buying opportunity rather than a sign of things to come. 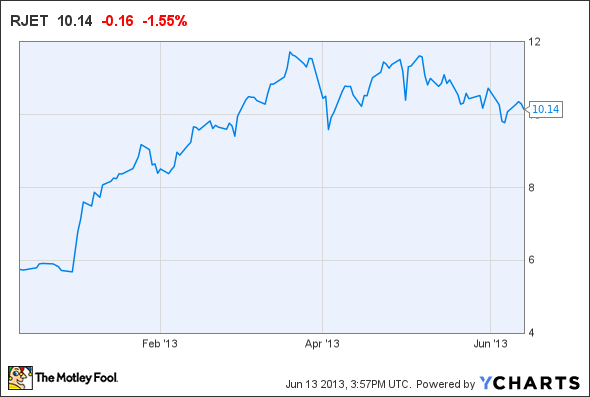 Progress, but slow progress
In early April, various media sources reported that two investment firms were interested in buying Frontier. The rumored purchase price was $50 million or less, but the buyer would also assume nearly $1 billion of debt, which would significantly improve Republic’s balance sheet. On the company’s earnings call at the end of the month, Republic CEO Bryan Bedford stated that he could not answer any questions about the sale process, but that he hoped a sale transaction would be completed in June or July.

At an investor conference on May 15, Republic Airways Holdings Inc. (NASDAQ:RJET) gave an “update” on the sale process, stating that management was still working out the terms of a potential sale to close in early Q3, and expected to know more within 30 days. However, at a conference earlier this week — almost a month later — Republic still had no information to share, other than that they would know more within two to four weeks.

With the sale negotiations covered by non-disclosure agreements, Republic Airways Holdings Inc. (NASDAQ:RJET) is unable to give investors any useful information about their progress. While this is frustrating for investors, it does not necessarily mean that there is a “problem” with the sale process. If anything, it suggests that Republic’s management is holding out for a good price.

In a worst case scenario, Republic Airways Holdings Inc. (NASDAQ:RJET) could just spin Frontier off as a separate public company, which could be just as lucrative for shareholders. After all, Spirit Airlines Incorporated (NASDAQ:SAVE) is only slightly larger than Frontier, but commands a valuation above $2 billion due to its high profitability. If Frontier can become just half as successful as Spirit Airlines Incorporated (NASDAQ:SAVE) (from a margin perspective), it would be worth far more than the expected sale price.