Back in the depths of the Great Recession, regional airline operator Republic Airways Holdings Inc. (NASDAQ:RJET) made an opportunistic leap into mainline service with the purchase of two small, troubled carriers, Midwest Airlines and Frontier Airlines. At the time, The Wall Street Journal speculated that Republic hoped to salvage investments it had made in the two carriers, while taking over more of their flying. The move turned into a disaster. While Republic had previously produced reliable (and growing) EPS, the company’s earnings turned volatile and Republic posted several ugly losses. 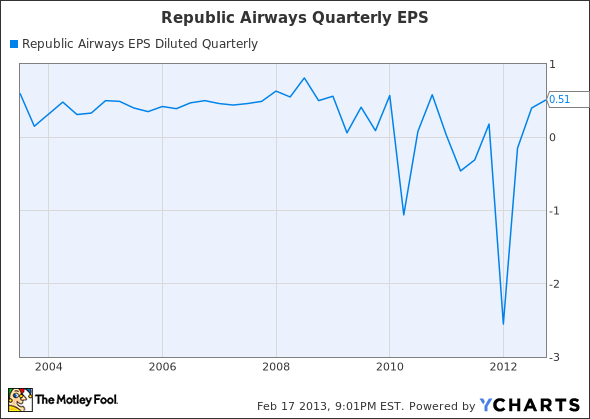 Republic eventually phased out the Midwest brand and now operates all of its mainline service as Frontier Airlines. Moreover the company has returned to profitability. Additionally, Republic plans to spin off Frontier Airlines during 2013, which could be a catalyst for the stock to move higher. While experts debate whether corporate spin-offs create value or not, Republic’s struggles in the past few years are proof enough that Republic and Frontier are better apart. Both halves of the company are likely to see better stock performance after the spinoff occurs.

Republic’s blunder
There are big differences between operating a regional carrier and running a mainline “branded” airline. For regional carriers, flights are marketed under the partner airline’s name, (e.g. United Express), and the latter also sells all the tickets. The regional carrier receives a fixed fee, typically through an arrangement called a “capacity purchase.” Since the mainline partner is responsible for filling the plane, regional carriers can focus solely on keeping costs low. By contrast, for a mainline carrier to be profitable, it must fill its seats at acceptable prices, in addition to keeping costs in check.

Republic learned this distinction the hard way after acquiring Midwest and Frontier. In Milwaukee, Midwest Airlines had already come under pressure from AirTran in the years leading up to Republic’s 2009 acquisition of Midwest. AirTran’s lower-cost model allowed it to undercut Midwest’s fares and gradually chip away at its market share. Then, low-fare leader Southwest Airlines Co. (NYSE:LUV) entered the market in late 2009. Southwest’s purchase of AirTran has now given it a dominant share of traffic in Milwaukee. Midwest (which was eventually folded into Frontier) could not compete, and the Milwaukee hub was eliminated in stages.

A similar pattern of events occurred in Denver, Frontier’s main hub. Southwest entered the market in 2006, seeing it as strategically important. Southwest tried to acquire Frontier after the latter declared bankruptcy in 2008, but was outbid by Republic. However, Southwest grew rapidly in Denver, which is now its fifth-largest focus city with 152 daily departures. Frontier is now in the unfortunate position of being the No. 3 carrier in its home market, behind Southwest and market leader United Continental. Heavy competition thus weighed down performance at both Midwest and Frontier after they were acquired by Republic.

Improving performance
However, Republic’s performance is finally improving, in both its “legacy” regional operations and the Frontier subsidiary. A restructuring at Frontier has cut costs while improving revenue performance. Frontier has focused on cutting short routes in favor of longer, more profitable trips. As part of this strategy, the carrier is dropping service in Colorado Springs, previously one of its biggest markets. Instead, Frontier is starting to build a small focus city operation at Trenton-Mercer Airport, a small New Jersey airport roughly halfway between major airline hubs in Newark and Philadelphia. Frontier has already begun flights from Trenton to various warm weather destinations, and is planning to add service to several major East Coast and Midwest cities in April. The carrier is banking on convenience and low fares to attract leisure travelers to Trenton, where it faces no direct competition. So far, the service appears to be a success.