Regions Financial Corporation (NYSE:RF) investors should be aware of a large decrease in hedge fund interest in recent months. Regions Financial was one of 10 Stocks Hedge Funds Ditched in Q3 Just Before the Market Crushed Them (RF shares have crumbled by 19% in Q4). Unsurprisingly, it also failed to rank among the 30 Most Popular Stocks Among Hedge Funds.

In the eyes of most traders, hedge funds are perceived as unimportant, outdated financial vehicles of yesteryear. While there are more than 8,000 funds in operation at the moment, Our researchers hone in on the upper echelon of this group, about 700 funds. Most estimates calculate that this group of people control most of the hedge fund industry’s total asset base, and by paying attention to their finest equity investments, Insider Monkey has brought to light several investment strategies that have historically beaten the S&P 500 index. Insider Monkey’s flagship hedge fund strategy beat the S&P 500 index by 6 percentage points a year since its inception in May 2014 through early November 2018. We were able to generate large returns even by identifying short candidates. Our portfolio of short stocks lost 24% since February 2017 (through December 3rd) even though the market was up nearly 23% during the same period. We just shared a list of 11 short targets in our latest quarterly update. 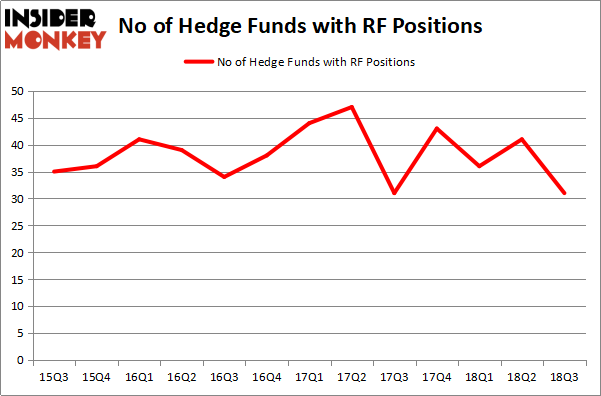 Since Regions Financial Corporation (NYSE:RF) has experienced bearish sentiment from the smart money, it’s easy to see that there is a sect of fund managers that elected to cut their positions entirely last quarter. Interestingly, Clint Carlson’s Carlson Capital dropped the largest stake of the “upper crust” of funds monitored by Insider Monkey, valued at close to $32.9 million in stock. Robert Pohly’s fund, Samlyn Capital, also dumped its stock, about $28 million worth. These transactions are intriguing to say the least, as aggregate hedge fund interest dropped by 10 funds last quarter.

As you can see these stocks had an average of 33 hedge funds with bullish positions and the average amount invested in these stocks was $3.13 billion. That figure was $952 million in RF’s case. TransDigm Group Incorporated (NYSE:TDG) is the most popular stock in this table. On the other hand Eversource Energy (NYSE:ES) is the least popular one with only 19 bullish hedge fund positions. Regions Financial Corporation (NYSE:RF) is not the least popular stock in this group but hedge fund interest is still below average. This is a slightly negative signal and we’d rather spend our time researching stocks that hedge funds are piling on. In this regard TDG might be a better candidate to consider a long position.