After surging more than 60% after earnings last month, shares of Netflix, Inc. (NASDAQ:NFLX) closed last week around $165. This week, shares have already gained an additional 12%, closing at $184.41 on Wednesday. What has caused this secondary rally? 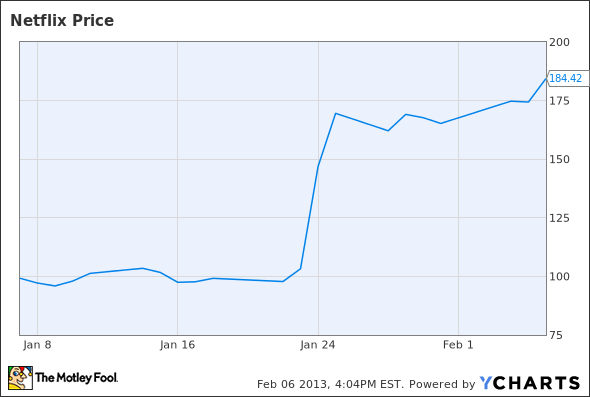 Unfortunately for shareholders, the main cause of this week’s rally has nothing to do with Netflix’s fundamentals. Instead, it has primarily been driven by speculation that Netflix, Inc. (NASDAQ:NFLX) will take Dell Inc. (NASDAQ:DELL)‘s spot in the Nasdaq-100 index. Traders are probably buying Netflix now to take advantage of future capital inflows from portfolio managers who track the Nasdaq-100.

Re-entering the Nasdaq-100
The Nasdaq-100 index is made up of the 100 largest non-financial companies listed on the Nasdaq exchange. It is one of the most popular indexes in the stock market, and is tracked by the PowerShares QQQ Trust, Series 1 (NASDAQ:QQQ). Netflix had been a member of the index until it was removed late last year. However, with Nasdaq-100 member Dell having announced this week that it will go private through a leveraged buyout, the exchange needs a new member for the Nasdaq-100 index.

In the two months since it was dropped from the index, Netflix’s stock has nearly doubled in value. That makes it currently the most valuable member of the Q50, a group of 50 stocks next eligible for inclusion in the Nasdaq-100. As a result, it is now the leading candidate to take Dell’s spot in the index. Traders, expecting future inflows to Netflix stock, have jumped in now to profit from the change.

Fundamentals have not improved
However, if we look at Netflix’s fundamentals, there is no reason for the stock to be logging significant gains this week. The company’s flagship original series, House of Cards, was released last week, but Sandvine (a company that monitors Internet data usage) stated on Monday that Netflix saw no measurable increase in traffic since the release. Netflix is relying on House of Cards to drive subscriber growth, and spent $100 million to produce two seasons of the show. Unless Sandvine failed to adjust for the dampening effect of the Super Bowl on Netflix usage, this data point is ominous.