Five Below Inc (NASDAQ:FIVE) has gotten the nod from RBC Capital Markets, with analyst Scot Ciccarelli initiating coverage on the stock in a note on Tuesday that gave the specialty retailer a “Buy” rating and a price target of $48 per share. Today, the stock has risen as much as 3.79% to $41.40 per share after it closed at $39.88 yesterday. The price target from RBC Capital Markets represents an upside of 20.36% from yesterday’s closing price. According to Ciccarelli, Five Below Inc. has “huge” potential and has “one of the best long-term growth profiles in retail”. The RBC Capital Markets analyst writes that the firm has the potential to expand its store footprint by “nearly 500+ percent over time”. He also notes that because of the productivity of its stores, the company’s recent first-year 4-wall ROI is 150%, which has in turn enabled investment paybacks in about eight months’ time. For 2015 and 2016, Five Below Inc (NASDAQ:FIVE) is estimated to increase its store numbers by about 20%. Over the long term, the firm hopes to have about 2,000 stores, Ciccarelli writes. Furthermore, the analyst expects an “impressive” ROI of 110% to 120% within a new store’s first 12 months of operation. Five Below sells a variety of products at discount prices of between $1 and $5, which include clothing, toys, and outdoor gear, with a focus on the teen and pre-teen market. 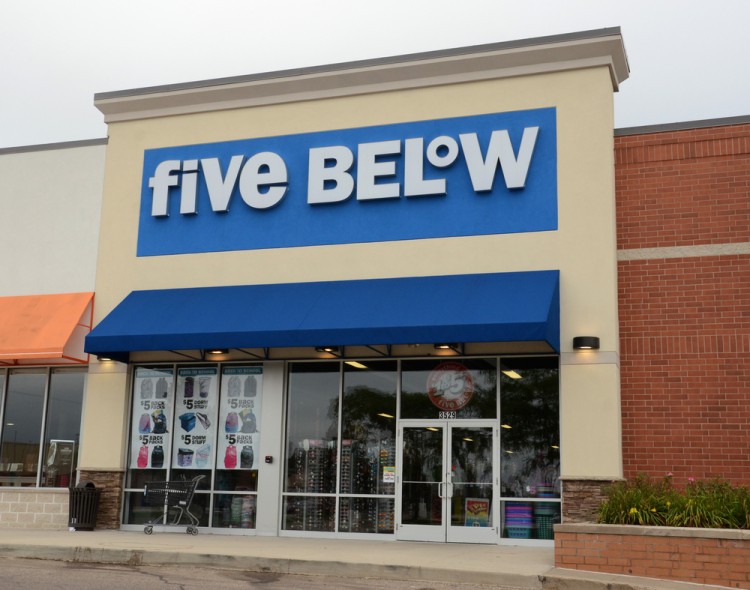 Hedge fund intelligence site Insider Monkey is keen on monitoring hedge fund activity concerning firms like Five Below Inc (NASDAQ:FIVE) since professional investors at the helm of such funds spend considerable time and money conducting due diligence on each company they invest in. This makes them the perfect investors to emulate. However, while hedge fund returns have been strong the past two years, we also know that the returns of hedge funds on the whole have not been good for several years, underperforming the market. We analyzed the historical stock picks of these investors and our research revealed that the small-cap picks of these funds performed far better than their large-cap picks, which is where most of their money is invested and why their performances as a whole have been poor. A portfolio of the 15 most popular small-cap stocks among funds outperformed the S&P 500 Total Return Index by 95 basis points per month between 1999 and 2012 in backtesting. The exceptional results of this strategy got even better in forward testing after the strategy went live at the end of August 2012. A portfolio consisting of the 15 most popular small-cap stock picks among the funds we track has returned more than 144% and beaten the market by more than 84 percentage points since then, and by 4.6 percentage points in the first quarter of this year (see the details).

Tracking hedge funds and insider activity in a stock is therefore a powerful tool that can provide valuable insight to investors. Insider Monkey also tracks trades made by insiders of a company of their firms’ shares, as activity in this area yields insight into the level of confidence the upper management of companies has in them and furthermore, signals their dedication to them and to increasing shareholder value. In the case of Five Below Inc, as impressed as Scot Ciccarelli obviously is, hedge funds appear to also be enamored with the company. The firm has seen an increase in enthusiasm from smart money in recent months as the firm was in 20 hedge funds’ portfolios at the end of March, while there were  just 11 hedge funds in our database with Five Below Inc positions at the end of 2014. On the insider trading front, there were no sales of shares by insiders recorded during the first and second quarters of the year. However, in what may be considered another big sign of confidence, Joel Anderson, president and CEO of Five Below Inc, purchased 3,000 shares of the company on April 1.

With this in mind, let’s look at how hedge funds have been trading the specialty retail chain operator.

How have hedgies been trading Five Below Inc (NASDAQ:FIVE)?

At the end of the first quarter of 2015, a total of 20 of the hedge funds tracked by Insider Monkey held long positions in this stock, a substantial change of 82% from the previous quarter. Hedge funds tracked by Insider Monkey held a total of $191.37 million in Five Below Inc’s shares by the end of the first quarter, down from $210.51 million in the previous quarter. This is a 9.09% decrease in value of holdings but considering that the stock price declined 12.88% from January 2, 2015 through March 31, 2015, there was a net addition in the size of holdings among the funds we track, in terms of shares, which shows some bullishness, even in the face of the declines.

Of the funds tracked by Insider Monkey, Ken Griffin’s Citadel Investment Group had the biggest position in Five Below Inc (NASDAQ:FIVE), worth close to $36.4 million. Sitting on the number 2 spot is Crestwood Capital Management, managed by Michael R. Weisberg, which held a $33.3 million position; 4.5% of its 13F portfolio was allocated to the company. Some other peers that held long positions include Alexander Mitchell’s Scopus Asset Management , and Aaron Cowen’s Suvretta Capital Management.

With a general bullishness amongst the heavyweights, some big names were leading the bulls’ herd. Tyvor Capital, managed by John Tompkins, initiated the largest position in Five Below Inc (NASDAQ:FIVE). Tyvor Capital had $20.9 million invested in the company at the end of the first quarter. Alexander Mitchell’s Scopus Asset Management, mentioned above, also initiated a $20.4 million position during the quarter. The other funds with brand new Five Below positions are Louis Bacon’s Moore Global Investments, and Glenn Russell Dubin’s Highbridge Capital Management.

With investment bank RBC Capital Markets’ approval being mirrored by more hedge funds and a top company insider, showing Five Below Inc (NASDAQ:FIVE) some love seems more than sensible at the moment.