Phillips-Van Heusen rocketed up 10% last week, thanks to posting EPS of $1.91, well above $1.33 in the prior-year’s quarter. PVH continues to separate itself from the likes of Ralph Lauren Corp (NYSE:RL) and VF Corp (NYSE:VFC) in terms of price performance over the past twelve months. What’s more is that with its recent acquisition of Warnaco, PVH (NYSE:PVH) will be able to unite the Calvin Klein brand under one roof, helping drive the company’s long-term growth and potentially pushing the stock higher. 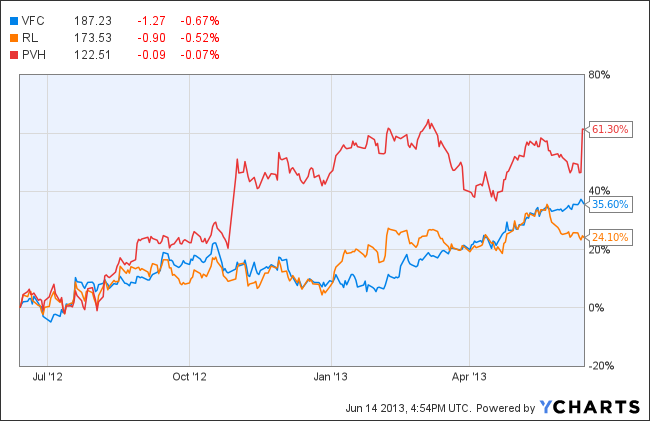 “2013 will be a year of transition for PVH. We are actively implementing our integration plans to build upon the foundation of PVH around the world and pave the way for the continued success of our businesses. We are optimistic that the expansion of our brands globally and the sound execution of our business strategies will continue to drive long-term growth and stockholder value.”

The return of the shopper

The big driver for all the apparel companies will be a rise in discretionary spending, which will be spurred on by rising employment and bolstering consumer confidence. The Thomson Reuters and University of Michigan index of consumer sentiment remains near six-year highs, thanks to increased hiring and rising property values. This was helped by the 175,000 jobs added last month.

Ralph Lauren Corp (NYSE:RL) is another major apparel company. It managed to post fiscal 4Q EPS of $1.37 compared to $0.99 for the same period last year. This comes as the company saw positive revenue growth despite the economic downturn, thanks to its affluent customer base.

Management has also guided that fiscal 2014 revenue will grow some 4% to 7%, as well as seeing operating margin expansion of 25 basis points to 75 basis points. Ralph Lauren already has an impressive operating margin of 16.5% for fiscal 2013. Going forward, Ralph Lauren Corp (NYSE:RL) should perform well on the back of a debt-free balance sheet and strong cash position of $1.4 billion. This strong balance sheet should help the retailer with its global expansion and enhanced brand offerings.

The retailer is also looking to open some 30 retail stores in fiscal 2013, namely in international markets. Part of the key opportunities for Ralph Lauren Corp (NYSE:RL) include the Asia market, including increasing its brand positioning in Japan, South Korea, and Greater China.