Ralph Lauren is average — at best
If you haven’t taken a look at it in a while, you might be surprised to learn that Ralph Lauren’s stock price is actually in the triple digits. This might lead you to think things are going well for the company — but they aren’t.

When you stack Ralph Lauren Corp (NYSE:RL) stock up against two of its bigger rivals, the ambiguously named PVH Corp (NYSE:PVH) and VF Corp (NYSE:VFC), it turns out that Ralph is actually the only stock of the three that’s been underperforming the S&P 500 over the past year. As the S&P gained 20%, Ralph Lauren stock tacked on only 15% — barely half the 29% gain at V.F., and only a third of PVH Corp (NYSE:PVH)’s 46% return.

True, Ralph Lauren Corp (NYSE:RL) stock also pays a dividend, but at a mere 0.9%, it’s hardly enough to make up the difference in stock price gains — and, in any case, Ralph’s dividend yield is less than half the payout at VF Corp (NYSE:VFC).

Why is Ralph so stingy with its cash? Perhaps because, of the three companies named, it’s got the least cash to play with. Lay the three firms side by side, and you’ll quickly see that Ralph has the worst “free cash flow yield” of the bunch. 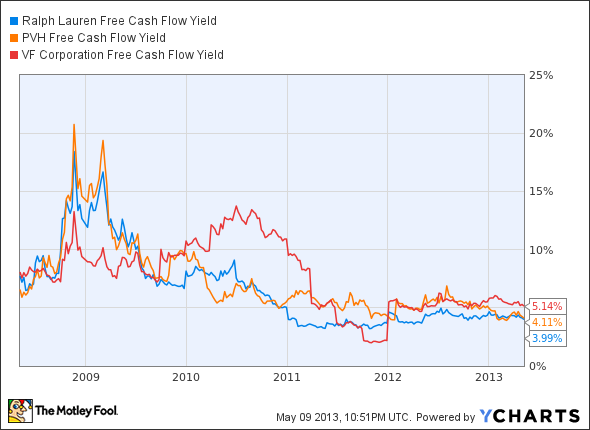 Ralph Lauren costs too much
Yet, it’s surprising that, for a company that’s producing less cash per dollar of market cap than either of its Big Apparel peers, Ralph Lauren stock actually costs more relative to its profits than do either of its rivals. Priced at 24 times earnings, Ralph Lauren Corp (NYSE:RL) shares carry a valuation 19% higher than shares of PVH Corp (NYSE:PVH), and cost 36% more than V.F. Corporation. It hardly looks like it does. While Ralph Lauren Corp (NYSE:RL)’s 9.8% sales growth rate over the past five years is certainly respectable enough, it’s not all that much better than the 8.6% sales growth rate that V.F. Corporation threw up — and it’s less than half the growth rate of PVH.