Ralph Lauren Corp (NYSE:RL) operates in three segments: Wholesale, Retail, and Licensing, which accounted for 45%, 52%, and 3% of its FY2013 net revenues, respectively.

In the recent first quarter, net revenue increased 4% to $1.7 billion year over year. While Ralph Lauren saw strength in domestic wholesale and European retail, the acquisition of Chaps Menswear in April 2013 aided its revenue bump. The revenue increase was also partially offset by weakness in European wholesale markets, and overall softness in China. Ralph Lauren is looking to mend its operating strategies and cost management in order to improve in these regions.

In addition to the Chaps Menswear acquisition, Ralph Lauren carried out its plan to close 13 of its 14 Rugby locations; it’ll use the freed capital for higher-growth operations. Furthermore, Ralph Lauren Corp (NYSE:RL) has discontinued sales of most products under its American Living brand. The company took these measures to reduce costs, which could ultimately boost earnings.

Overall, Ralph Lauren is making adjustments to perform better in a tough economy. This might sound like a logical approach, but many retailers are in denial about the health of the consumer, and have made little to no such moves themselves, simply hoping that consumers will somehow strengthen without any specific catalyst. This isn’t likely, and it’s refreshing to see a company admit its external challenges and prepare accordingly.

Ralph Lauren is especially concerned about the United States, Europe, and Asia, because of high unemployment rates, foreign exchange losses, volatile commodity prices, and an overall lack of consumer confidence. Perhaps more concerning is that Ralph Lauren doesn’t seem to be hopeful about a potential turnaround, citing reduced government spending in the United States and continued austerity in Europe. Ralph Lauren noted inconsistent consumer traffic and spending (all three regions), and that retailers have needed to run sales and cut prices to attract customers, thinning out margins and threatening earnings. 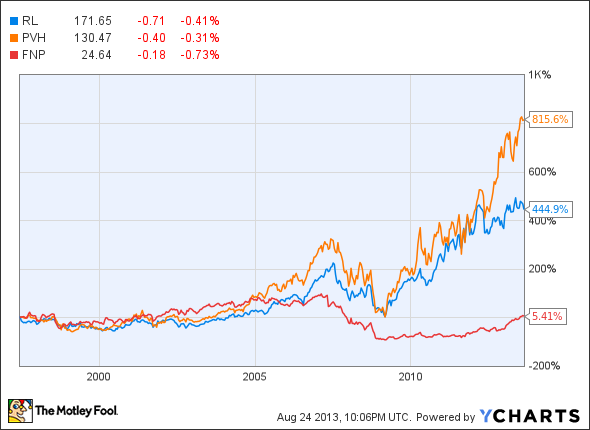 While Ralph Lauren is well-known for its namesake brand, PVH offers popular brands such as Calvin Klein, Tommy Hilfiger, Van Heusen, IZOD, Bass, Arrow, and Eagle. This broad diversification allows PVH Corp (NYSE:PVH) to effectively target different markets at once. It has also led PVH to consistent top- and bottom-line performances. That said, both Ralph Lauren Corp (NYSE:RL) and PVH have remained strong over the past several years, despite challenging circumstances.