QUALCOMM, Inc. (QCOM): Should You Worry?

Mobile chip maker recently took a dip despite reporting solid quarterly earnings and guidance. The San Diego-based company, which temporarily eclipsed Intel Corporation (NASDAQ:INTC) as the world’s most valuable chip manufacturer last November, has been a hot growth stock over the past decade, rising over 300% on robust demand for mobile processors and components.

Can this tech giant continue to rise, despite worries regarding the increasing saturation of the smartphone market?

For its second quarter, QUALCOMM, Inc. (NASDAQ:QCOM) earned $1.17 per share. Net income slid 16% to $1.87 billion from the prior year quarter, but was in line with Thomson Reuters estimates. Revenue rose 24% to $6.12 billion, and topped the consensus estimate of $6.08 billion.

Looking forward to the full year, QUALCOMM, Inc. (NASDAQ:QCOM) expects to earn $4.50 to $4.55 per share, in line with the consensus estimate of $4.54. It now expects full-year revenue of $24 billion to $25 billion, up from its prior estimate of $23.4 billion to $24.4 billion. The company expects higher top line growth from rising smartphone sales.

On the surface, QUALCOMM, Inc. (NASDAQ:QCOM)’s earnings report was lackluster but steady. Yet the stock plunged over 5% on April 25 after earnings, due to concerns that it hadn’t set the bars high enough for its quarterly and full year earnings per share guidance.

Qualcomm’s main products are processors and radio chips for smartphones and tablets. The company’s most well-known product is its Snapdragon mobile processor, which is used by Samsung, HTC, Sony, Nokia Corporation (ADR) (NYSE:NOK) and Research In Motion Ltd (NASDAQ:BBRY) in their mobile devices. Qualcomm also produces radio chips for Apple Inc. (NASDAQ:AAPL), and there are rumors that Apple may use the Snapdragon processor in a lower-end iPhone.

Smartphone shipments are forecast to rise 20% annually to 1.7 billion by 2017, according to research firm Gartner. However, research firm IDC notes that even if the smartphone market grows 27% this year, it still represents a slowdown from the 46% year-on-year growth it reported in a year ago, which means that the market is becoming increasingly saturated.

To compensate for this imminent saturation of higher-end markets, Qualcomm is looking toward lower-end markets, especially across Asia, to continuing growing its top line. QUALCOMM, Inc. (NASDAQ:QCOM) noted that only a third of mobile handsets in China were capable of 3G speeds, which makes it a fertile market for its radio chips. Qualcomm also noted that sales of 3G devices have risen 34% over the past year to 1.1 billion in emerging markets.

However, there are major challenges in these markets.

Low-cost handset manufacturers currently buy cheaper components from Qualcomm and pay lower royalties for its network technology. QUALCOMM, Inc. (NASDAQ:QCOM) must also face lower cost component makers – such as Taiwan-based Mediatek and China-based Spreadtrum Communications– which are willing to sacrifice their own margins in exchange for market share gains and revenue growth.

This shifting focus to lower-margin emerging markets worries analysts. They are concerned that Qualcomm’s higher-margin business is about to flatten, similar to the fate of smaller industry peers such as Broadcom Corporation (NASDAQ:BRCM). 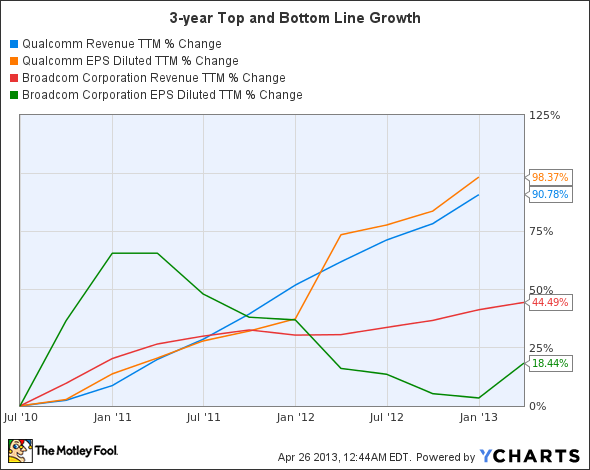 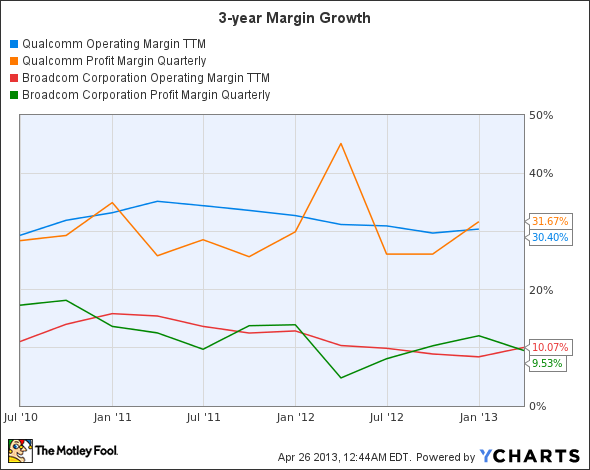 Investors want to see Qualcomm continue growing its profit at a faster rate than in its revenue, which will be difficult if it focuses on China, India and other emerging markets.

“You’re seeing revenue upside but not the earnings upside you’d want to come with it,” stated Bernstein analyst Stacy Rasgon. “Whether it’s because of competition or they’re investing to stop competition, either way – it can lead to margin decline.”

A major initiative in QUALCOMM, Inc. (NASDAQ:QCOM)‘s push into emerging markets is the Qualcomm Reference Design program (QRD). The QRD program, which provides OEMs with Qualcomm hardware templates to base their designs on, allows vendors to create new handsets in as few as 60 days from start to launch. Before QRD, it took manufacturers between a year and a year and a half to launch a new product.

While the QRD program is mainly used by Chinese companies such as Lenovo, Yulong and Tianyu, Qualcomm noted that “Tier 1” device makers — such as Samsung and HTC — are currently evaluating the program for use with their lower-end handsets. As of January, Qualcomm reported that 40 manufacturers have commercialized over 170 QRD-based devices. While over 90% of those devices were for the Chinese market, OEMs in Brazil, India, Taiwan and Vietnam have also joined the program.

Related Insider Monkey Articles
Apple Inc. (AAPL): A Look Back At The ‘Ups’ Of The Past Eight Months...

Apple Vs Samsung: Apple – How Does Cupertino Fit Into This Growing Market...Amazon.com, Inc. (AMZN): Will The Company’s Margins Improve?Zynga Inc (ZNGA), Baidu.com, Inc. (BIDU), NVR, Inc. (NVR) & This Week&#...Apple Inc. (AAPL) Stock Finally Rallies, But Not Enough To Save My Portfolio...Amazon.com, Inc. (AMZN): Could a Set-Top Box Pop This e-Retailer’s Stock...
Monthly Newsletter Strategy
Download a free copy of our newsletter and see the details inside!
Hedge Fund Resource Center
Billionaire Hedge Funds