It seems like just yesterday that QUALCOMM, Inc. (NASDAQ:QCOM) was boosting its dividend and repurchase program. Oh wait, it was actually almost exactly one year ago that the mobile chip giant upped its quarterly payouts by 16%. That means it’s that time of the year again: Time to return more cash to shareholders. 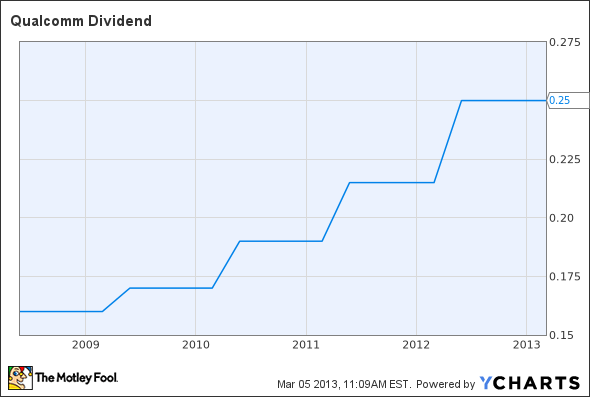 This time around, the company is boosting its dividend by an envious 40% to $0.35 per share quarterly, up from $0.25 per share quarterly. Notably, that’s the biggest annual increase the company has announced in years. Over the previous four years, QUALCOMM, Inc. (NASDAQ:QCOM) has increased its dividend payout by 6%, 12%, 13%, and 16%, in that order, so a 40% jump is quite generous indeed.

Signal received
When you talk about dividend signaling theory, the clear signal that management is sending to shareholders is that the business remains rock solid, despite intensifying competition from the likes of NVIDIA Corporation(NASDAQ:NVDA) and Broadcom Corporation (NASDAQ:BRCM), two companies looking to cut in on QUALCOMM, Inc. (NASDAQ:QCOM)‘s market share.

NVIDIA’s new Tegra 4i has been a long time coming, and it hopes its integrated LTE modem will make inroads into some of the OEM spots that Qualcomm currently enjoys. The Tegra 4 that doesn’t include an integrated LTE modem is also en route to the market, but Qualcomm isn’t scared. Senior VP Raj Talluri said the newest Snapdragon series of mobile applications processors “easily” beat NVIDIA Corporation(NASDAQ:NVDA)’s, in part because of higher levels of integration.

Broadcom recently launched a new baseband modem that supports LTE-Advanced, targeting the discrete modem market. Some analysts think that Broadcom could potentially score a win with the biggest buyer of discrete basebands out there: Apple Inc. (NASDAQ:AAPL). The iPhone maker is the largest OEM by volume that still uses discrete basebands since it uses its own in-house line of applications processors. On the other hand, other analysts think Qualcomm’s seat at Apple’s table is relatively safe.

Management must feel confident despite these competitive threats if it’s willing to increase its dividend by such a healthy amount. Another reason why Qualcomm may feel so comfortable is that the Chinese smartphone market, which is now the largest in the world, just recently hit an inflection point. The migration to 3G, in which Qualcomm has a licensing fortress, is proceeding along swimmingly, with 2G subscribers declining for the first time ever. That bodes well for both Qualcomm’s royalty business as well as baseband sales.