STAG is the acronym for Single Tenant Acquisition Group — the name of a REIT executing a unique strategy that pays investors a high dividend yield while growing at a faster rate than any of its peers.

Stag Industrial Inc  (NYSE:STAG) is an $854 million industrial REIT that has only been publicly traded since April 2011. It is not nearly as large as $1.6 billion First Industrial Realty Trust, Inc. (NYSE:FR), or $1.9 billion DCT Industrial Trust Inc. (NYSE:DCT), and is absolutely dwarfed by $17 billion Prologis Inc (NYSE:PLD). However, STAG is outperforming these larger established industrial REITs.

Here are two charts that tell the story: 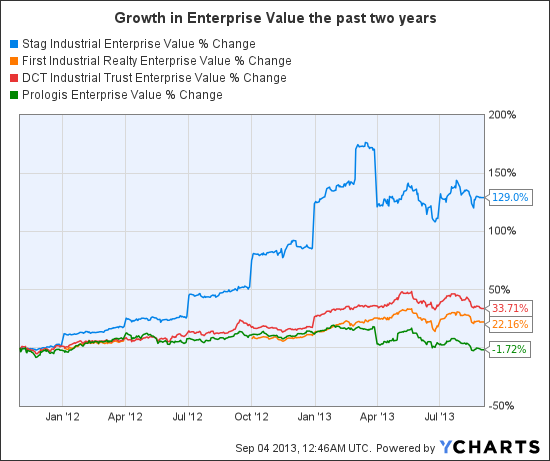 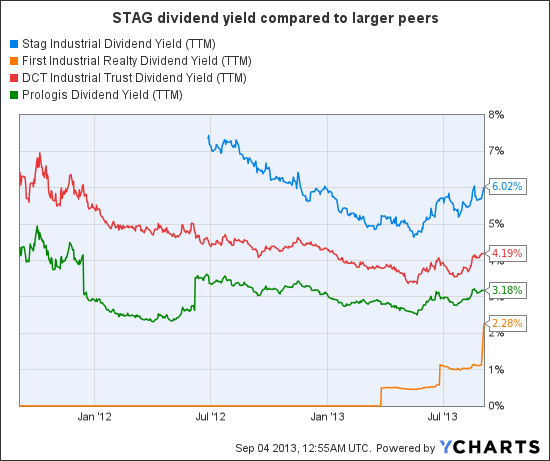 Stag Industrial Inc  (NYSE:STAG) Industrial announced on Aug 12, 2013 that it was raising its quarterly dividend on common shares from $0.27 per share to $0.30 per share — an 11% increase. A yield in the 6% range is considerably more than its larger industrial cousins. In fact, it is at the upper range for the entire REIT sector.

Why is STAG so successful?

Stag Industrial Inc  (NYSE:STAG) outpaces the crowd, mainly because it doesn’t try to go up against the bigger industrial REITs. STAG has an entirely different strategy — and is executing this strategy like clockwork. They do not develop new facilities; they acquire them.

In fact, Stag Industrial Inc  (NYSE:STAG) acquires Class B properties in secondary markets, typically in the $5 million to $25 million range. In order to appreciate how STAG differs, let’s take a quick look at where the larger players in the industrial REIT space focus their operations.

Investing in Prologis Inc (NYSE:PLD) would be a way for investors to leverage the “globalization” of supply chains.  It has 2,986 industrial properties under investment management in 21 countries located in the Americas, Europe, and Asia valued just under $23 billion — properties are typically located near key seaports, airports, and major freeway interchanges.

If you count managed properties, the total Prologis platform is 563 million square feet, valued at $46 billion. Additionally, it has a global land bank of 10,730 acres for future development.  Prologis doesn’t do anything in a small way.

DCT Industrial Trust Inc. (NYSE:DCT) is a very dynamic company in the process of rebalancing its real estate portfolio. It is focused on acquiring assets in targeted growth markets such as Los Angeles and the Inland Empire, Houston, Miami, New York/New Jersey, and Seattle. During the quarter ending June 30, 2013, DCT acquired 13 buildings for $157 million and sold 15 buildings for almost $52 million.

DCT Industrial management believes it can reward investors by building and leasing new modern industrial facilities. A dividend yield over 4% indicates that this plan is on course.

As of the second quarter, First Industrial Realty Trust, Inc. (NYSE:FR) owns, manages and has about 67 million square feet of industrial space under development. First Industrial is also building its balance sheet with a stated goal “to return to investment grade.” It is selectively buying and selling assets to help achieve this goal. First Industrial has targeted $75 million to $100 million in property sales for 2013. The company recently exited markets in Canada and Omaha, Nebraska.