Procter & Gamble Company (PG): What Upside Is There?

Defensive shares have had a terrific run in this bull market — to the point where some commentators are beginning to say that the run must surely be coming to an end. However, if you believe high-profile activist investor Bill Ackman, there is at least one prominent defensive stock which has plenty of outperformance ahead of it: Dow Jones Industrial Average (Dow Jones Indices:.DJI) component The Procter & Gamble Company (NYSE:PG).

Speaking at the Ira Sohn Investment Conference, Ackman called P&G one of the “great businesses of the world,” and said it could be worth $125 in two years’ time. How did he arrive at that figure? Ackman believes the company should be able to grow at 5% a year, and could trade at a forward price-to-earnings multiple of 20 by June 2015, enough to produce a $120 share price. Add an estimated $5 in dividends, and you have your $125 intrinsic value.

Ackman has already put his money where his mouth is with a roughly $2 billion stake in the firm. To verify whether he’s onto something or just talking his book, the following chart displays the price performance of The Procter & Gamble Company (NYSE:PG) shares versus that of the S&P 500, as well as the progression in The Procter & Gamble Company (NYSE:PG)’s price-to-earnings ratio, all starting from the bear market bottom on March 9, 2009: 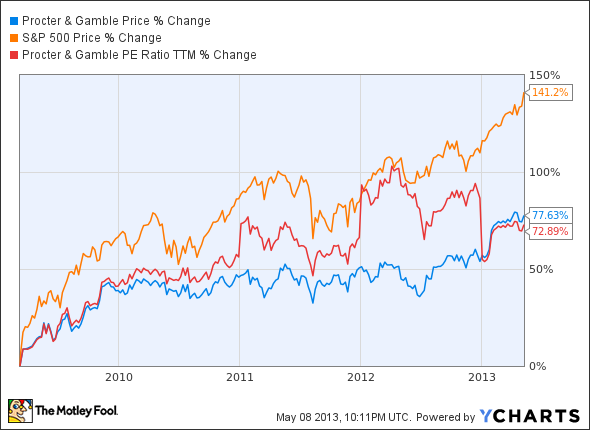 Two remarks are in order:

First, The Procter & Gamble Company (NYSE:PG) has badly underperformed the index in the current bull market, which suggests that outperformance over the next several years isn’t a far-fetched notion (assuming you believe the business isn’t in terminal decline.) Mean reversion is a genuine phenomenon.

Second, while the majority of the S&P 500’s gains are attributable to an increase in earnings rather than an increase in the valuation multiple, the reverse is true of The Procter & Gamble Company (NYSE:PG). Indeed, the S&P 500’s trailing 12-months’ operating earnings per share are up 99%, better than two-thirds of the 141% rise in the index.

Meanwhile, the graph shows the difference in the change in The Procter & Gamble Company (NYSE:PG)’s share price, and the change in its price-to-earnings ratio is roughly five percentage points. Sure enough, the change in the company’s normalized earnings per share over the same period is less than 6%. (Total, not annualized!) Assuming the company can jump-start its earnings, the shares could benefit from a two-fold boost if the market is willing to attribute a higher multiple to those earnings. That, in turn, suggests strong returns are possible — even plausible.

The article Is Procter & Gamble Due for a 50% Run-Up? originally appeared on Fool.com and is written by Alex Dumortier, CFA.

Fool contributor Alex Dumortier, CFA has no position in any stocks mentioned; you can follow him on LinkedIn. The Motley Fool recommends Procter & Gamble.