PriceSmart, Inc. (NASDAQ:PSMT) owns and operates membership shopping warehouses and clubs in Latin America and the Caribbean, and it is widely considered to be Latin America’s version of Costco Wholesale Corporation (NASDAQ:COST). Discount retailers, by and large, have performed well this year, in line with the fact that consumers are spending more.

Year-to-date, PriceSmart, Inc. (NASDAQ:PSMT) has appreciated around 11%. With the company having declared its quarterly report last month, let’s take a look at how it performed and what lies ahead. 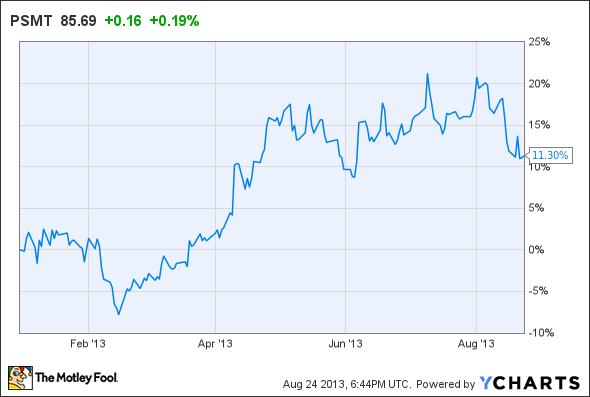 PriceSmart reported total revenue of $571.7 million in the quarter, and this was 13.1% higher than the year-ago quarter. It managed to beat the consensus estimate of $570 million by a whisker.

PriceSmart reported adjusted earnings of $0.61 per share, and hence failed to beat the consensus estimates of $0.64. Despite reporting better than expected top-line figures, the EPS miss was primarily due to lower gross margins.

Latin America comps (comparable warehouse sales) saw a growth of 16.4% in the quarter due to increased traffic following the Easter season and the Semana Santa celebrations, while new club openings also boosted sales. Net warehouse club sales moved up 12.3% to $555.8 million as a result of overall decent comps growth.

PriceSmart implemented higher membership fees about a year ago, and as a result of this income from membership fees grew 26.5% compared to the year-ago quarter. The company did not witness any increase in the attrition rate, so one can conclude that the increase in membership charges worked out well for the company. Renewal rates dropped to 84%, but that is still considered a very good number.

Early this year, in February, PriceSmart announced property acquisition for opening its sixth new warehouse in Costa Rica. The opening of Cartago Club is anticipated in the fall of 2013, and this would add to the top and bottom-lines. The company also has plans to open two more stores in Columbia. The timeline is not very specific, as there are lot of hassles going through the compliance procedures in Columbia. But, PriceSmart has expansion plans in place, which show that it has its eyes set on growth and expansion.

However, PriceSmart shares the same trend as other discount stores. There’s pressure on pricing, so sales of low-margin consumables grow while sales of high-margin items decline. The company is vulnerable to currency exchange rate fluctuations as well.

Sears Holdings Corp (NASDAQ:SHLD) has been in trouble for quite some time now. From the way share prices and dividend have moved down during last few years, it is apparent that Sears Holdings Corp (NASDAQ:SHLD) lacks any major initiative that could move this company forward. This is demonstrated by Sears spinning off its subsidiaries recently, and by the fact that the latest reported quarter saw yet another abysmal performance. Results were affected by the decline in number of operational stores, and also the after-effects of the spinoff of Hometown and Outlet Stores.