“But that’s as boring as watching paint dry.” Paint is not known for its excitement. It is not a ‘hot’ industry like biotech or social networks.

Paint is notable for its lack of change. You may remember how Tom Sawyer tricked his friends into painting his fence white for him… That book was written in 1876.

People are still painting their houses and (sometimes) fences to this day.

While paint my not be exciting, it can be very profitable. Long-term investors can compound their wealth over decades by investing in slow changing industries.

I’ll take boring and profitable over exciting and ‘pre-profit’ any day.

The global paint industry is rapidly consolidating. There are now 3 large names that dominate the market:

Both Sherwin Williams and PPG are Dividend Aristocrats – stocks with 25+ years of consecutive dividend increases.  These companies’ long dividend histories make sense given the slow changing nature of the paint industry.

This article takes a look at the highest ranked paint business using The 8 Rules of Dividend Investing: PPG Industries.

PPG Industries is a leading diversified producer of coatings, chemicals, and glass. The company is the world’s second largest producer of paints and coatings. The company was founded in 1883 and is headquartered in Pittsburgh, Pennsylvania.

Among hedge funds and other institutional investors tracked by Insider Monkey, 39 reported long positions in PPG Industries as of the end of March, down from 43 funds a quarter earlier. Overall, those funds amassed $1.11 billion worth of stock heading into the second quarter, which represented 3.70% of the outstanding stock. Clifford Fox’s Columbus Circle Investors is one of the largest shareholders of PPG Industries, having reported 2.52 million shares in its latest 13F filing. 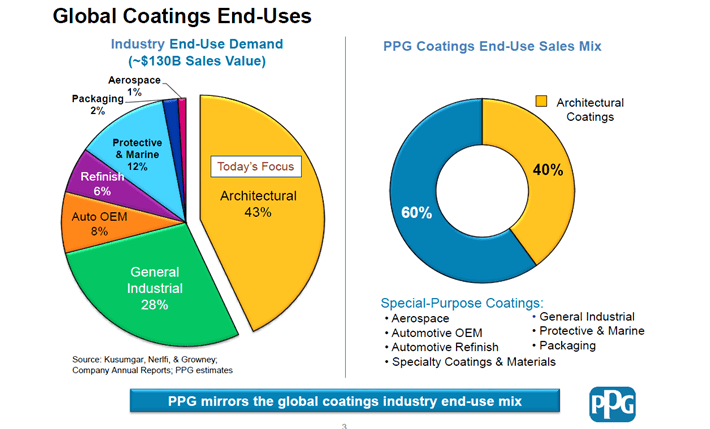 On April 21, PPG Industries reported record first-quarter 2016 financial results, which beat earnings-per-share expectations by $0.01. The company posted revenues of $3.67 billion in the quarter, missing the consensus estimate of $3.68 billion slightly.

PPG has shown earnings-per-share surprise in all its last four quarters, albeit by a small margin, as shown in the table below.