A few months ago, I sat down with a relative who has two kids getting ready to go to college. While discussing the price of college, he said, “It seems like everything is getting so expensive — even food is costing way more than it used to.”

I thought about that statement for a while, and decided to check it out for myself. Although I surely sympathize with the payments he is about to make, my uncle couldn’t have been more wrong. From a historical perspective, food is dirt cheap.

Take the long view
If you think about it, most of the “work” by our earliest ancestors was to provide two things: food and safety. There was no currency per se, but suffice it to say that at least 50% of their toil was devoted toward food.

Obviously, we don’t have records that far back to back up my statement. Fortunately, the USDA has been keeping tabs on how much we spend on food since 1929. Taken as a percentage of our disposable income, the amount has dropped dramatically in the last 85 years. In fact, relative to our incomes, food has simply never been cheaper. Interestingly, food away from home (restaurants, takeout, etc.) has actually increased since 1929, from 3.1% to 4.1%. That’s likely because eating out has always been a luxury, and over time, more people have been able to afford it.

The decrease in the percentage of our income spent on food, then, comes from food bought for consumption at home. At its height in 1933, we devoted 21.9% of our money toward at-home food. By 2011, it was only a quarter of that amount: 5.7%. That’s a mind-numbing difference.

Technology + science = cheap
An huge part of that shift is due to tremendous strides in agricultural technology, especially once the nation settled into a post-World-War-II mind-set in 1949. That’s when the era of industrial agriculture began to take hold.

These advances can be broken down into three categories: machines, fertilizers, and genetically modified crops.

When the tractor came along to replace mules, horses, and hand laborers, it became exponentially easier to farm the land. For example, in 1850, it took 90 hours of labor to produce 100 bushels of corn. By 1987, it took fewer than three hours — or just 3% of the time — to obtain the same harvest.

Fertilizers have also played an important role. Nature’s rhythms call for periods of work then rest, but much of our current food system is based on the premise that the land must meet or exceed the previous year’s harvest in order to feed a growing population. To interrupt the process, fertilizers — especially nitrogen, phosphate, and potash — jump-start the soil. Before fertilizers, nature put a cap on how much could be grown in a season. After fertilizers, those caps were gone. It shouldn’t be surprising, then, to see that just as the use of fertilizers was just ramping up, the price of food began to drop. 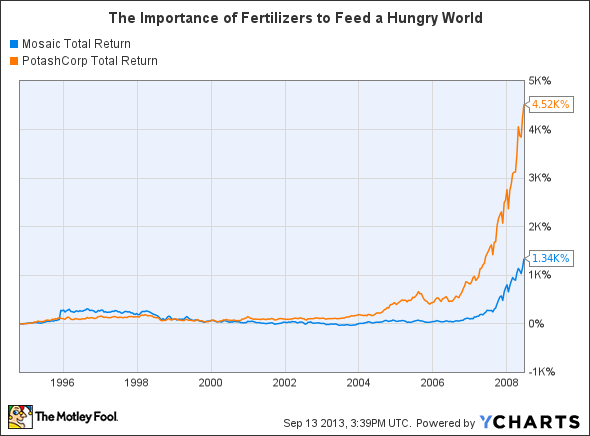