Companies 0 See All
Hedge Funds 0 See All
Insiders 0 See All
Institutional Investors 0 See All
Click here to see all results for Sorry, no results has been found matching your query.
ETF Trading-News-Stock Analysis

Phase 1 Trade Deal Compliance and Trump’s Re-Election Strategy by Greg Presseau of Perennial Capital
Following Trump’s election win I read two books to better understand him and his behavior: Games of Strategy: Theory and Application and The Art of the Deal.  The game theory book was intended to understand how Trump thinks.  However, he is extremely volatile and that makes it difficult to predict his behavior thus it was difficult to apply theories to his decision making.  The Art of the Deal, however, was much more insightful.  In an old email I characterized him as:

“He (Trump) is a winner.  Looking strong is important.  He’s also incredibly sneaky and untrustworthy (whatever it takes to win…)…In other words Trump uses last minute tactics to: A) strengthen his position and B) ensure his position is not weakened…As an options trader he’s a wing buyer that bullies the market to make his position in the money.”

Currently, winning to Trump is getting re-elected.  However, the country has a number of hurdles-high unemployment, ballooning income inequality and an erosion in confidence-to name a few.  As eluded to in past notes, we believe there will inevitably be a showdown with China and Navarro’s comments last night should not be dismissed.

Ultimately, we will assess the probability that Trump walks on the China trade deal by September and as we will see, it will have increasing importance on markets. 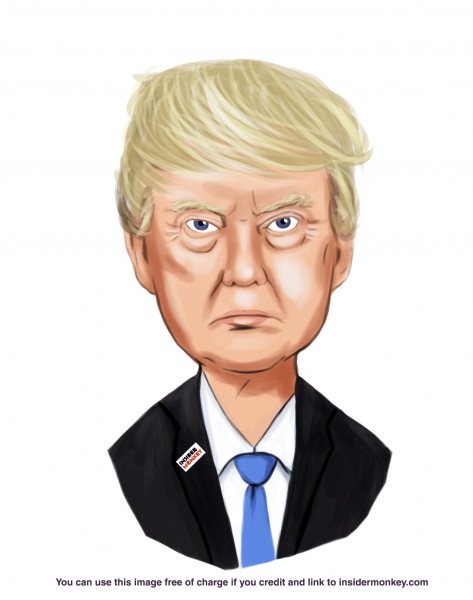 In order to adequately assess this probability, we need to understand each country’s position.  Looking at China, PMI’s were decimated following COVID-19 and they are just starting to get back on track.  However, as deduced before, some 50mm migrant workers have moved back to the countryside due to a lack of jobs.  This, coupled with food inflation that is still up 30% YoY, are the ingredients for discontent.  In fact, our Chinese protest model has been projecting sky-high protests: 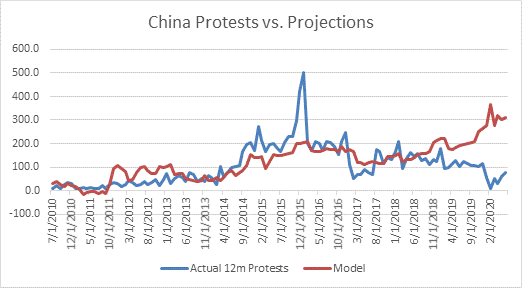 As we can see the projections have grossly overestimated actual protests.  COVID-19 was certainly a factor in limiting protests.  However, as PMI’s remain sluggish and food inflation remains buoyant, we have the seeds for discontent as per our model.  Indeed, June is on pace to see protests rebound.

We believe the Chinese government can contain this problem by using heavy-handed tactics and, more importantly, retaining manufacturing jobs.  Therefore, we believe China’s long-term strategy is to retain its place as a manufacturing hub.

The US position and strategy is complicated by Trump’s desire to win a re-election. By signing the Phase 1 trade deal, Trump believed that we would see increased manufacturing jobs.  This may have been the case but due to COVID-19 we are seeing very few results.  Since the deal was agreed in January 2020, China has promised to increase purchases of agricultural and manufactured US products as per our calculations below: 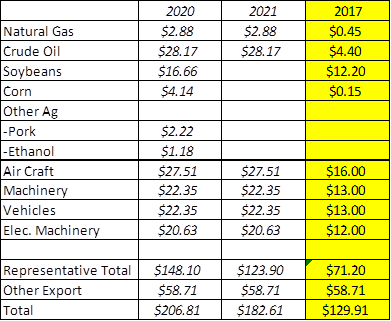 Using 2017 as a baseline we see that China intends to increase its imports of energy and agricultural commodities.  One thing to keep in mind, however, is that as prices drop in commodities, China will be forced to increase the volumes of its purchases.  For example, if China intended to buy 430K bpd at $65/bbl but the price drops to $32.50/bbl, they need to double the volumes (or if we go to negative prices they have to start exporting to the US!)

We believe the most visible way to assess China’s compliance of the trade deal is to look at the US soybean inspection and sales data on a weekly basis.  US export sales have been averaging 1.6 Z-scores above the 10-year average for this time of year.  Furthermore, sales could imply that China imports 41MMT in 2020 thus complying with the trade deal.  However, the bulk of the imports start in September and the way the weather is looking in the Midwest, we could have a bumper crop.  High production with expectations for lackluster exports could mean very low prices for soybeans and ag products in general.  This would most definitely erode confidence in Trump.

Looking at our Soybean supply/demand balance sheet we see two different scenarios depending on a trade deal which results in a $1.00/bu difference in the output: 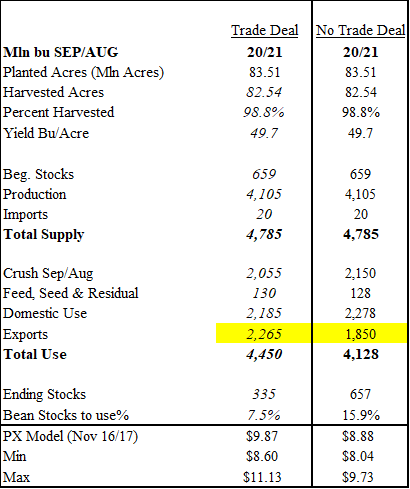 Lastly, looking at the seasonality of US soybean exports, we see that they typically do not pick up until September: 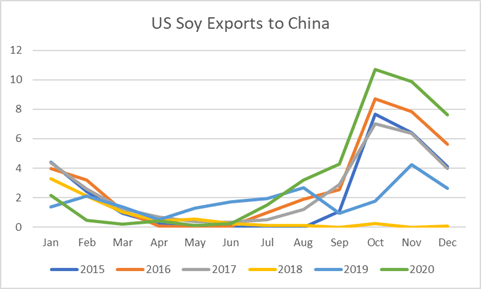 If prices erode further, farmers may see $9.80/bu for soybeans and an average Trump presidency price of $9.50/bu vs. $11.20/bu during the Obama presidency.  Even if China makes good on their end of the bargain, it may not help Trump because the farmers usually hedge 1/3 to 2/5 of their crops before harvest and before these exports materialize.  Due to the ideal weather conditions in the Midwest which results in higher production and the seasonality of US exports, we believe Trump may be forced to increase pressure on China and switch his re-election strategy.

Putting all of this together, we see that China and the US both need manufacturing jobs as income inequality remains high and both countries have the ingredients for social unrest.  Trump is currently banking on China to make good on its promise to buy American products.  However, the timing of such exports may come after voters make their decisions.  The key factor then falls on China.  They are well aware of the need to protect manufacturing goals over the long run.  They should also realize Trump’s goal is to be re-elected and does not inhibit China’s long-term strategy.  Therefore, to offset the timing of actual imports, they should have a grand announcement on purchases over the next 60 days.

The timing of the above event is too far out to include in our supply/demand balance sheets and price targets.  However, over the coming weeks its importance will crescendo and should have a material impact on markets and our assessment of markets.  Thus, our baseline is:

Each day that goes by without an indication and/or market moving announcement on Chinese purchases of US goods should increase the probability that Trump walks on the deal.  We believe the Chinese have framed this situation correctly and therefore believe they will start to accelerate purchases and even make announcements of purchases to placate the President and keep markets buoyant.