In the world of emerging-market investments, Latin America is commonly an after-thought. The region has many undeveloped fields, and nations who desperately want energy royalty payments. Without foreign assistance, many nations are simply unable to develop their resources. The continent is complex, but investors who are willing to examine and value the risks can find good deals.

The culture in Latin countries is very relational and the political system plays a relativity significant role in many aspects of life. Stark income inequalities and periodic bouts of populism affect various nations from time to time. In the late 1980s the idea of the Washington Consensus came about, where many nations implemented market-based reforms. With the fall of the Soviet Union and the failure of some of these reforms, many nations have decided to take a more socialist approach to development and governance. 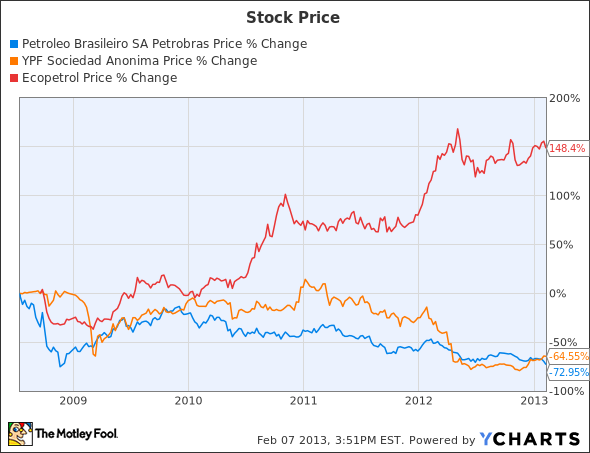 Petroleo Brasileiro Petrobras SA (ADR) (NYSE:PBR) and Brazil are great examples of the Modus Operandi of economic development in Latin America. Over the past couple of quarters, Petrobras has seen a large drag on earnings because the government-determined price for domestic oil products is lower than that of the international price. The company expects these imports to continue over the coming years while it foots the bill.

The company is active off of the west coast of Africa, in the Gulf of Mexico, and in other Latin American nations like Bolivia, Peru, and Argentina. Domestically they continue to expand their deepwater operations and upstream refineries.

Even with their goal of 4.2 million barrels per day by 2016, it is unclear just how much of this production will benefit the bottom line. Their gross margin of 36.1% is a tad higher than Exxon’s, but Petrobras’s use of their assets is not as effective. Their ROA of 3.3% and ROI 4.1% are both significantly lower than Exxon’s numbers. This is the result of being forced to ignore profit in order to satisfy the government. The average investor who does not speak Portuguese or closely follow Brazil’s political system will find better investments elsewhere.

YPF SA (ADR) (NYSE:YPF) has been in the news recently when the Argentinian government re-nationalized the company from Spain’s Repsol. Repsol was letting production levels fall; thus saddling the nation with an ever increasing trade balance bill. Large dividend payments from YPF to Repsol only increased Argentina’s view of Repsol as an expropriating conquistador.

Under their new owners, YPF has increased capital expenditures in their upstream and downstream operations. The firm has successfully increased crude oil production 0.6% in Q3 2012 relative to the year-ago quarter, and refinery throughput rose by 0.3% in the same time period. Given the nation’s goal to reduce imports and increase exports, such changes should continue in the future.