All of these companies delivered negative returns, reflecting the fact that crude oil’s risk premium (the minimum amount investors are willing to accept for compensation of owning a risky asset) has declined significantly from the high levels of February and March last year (at the height of Iran tensions.) 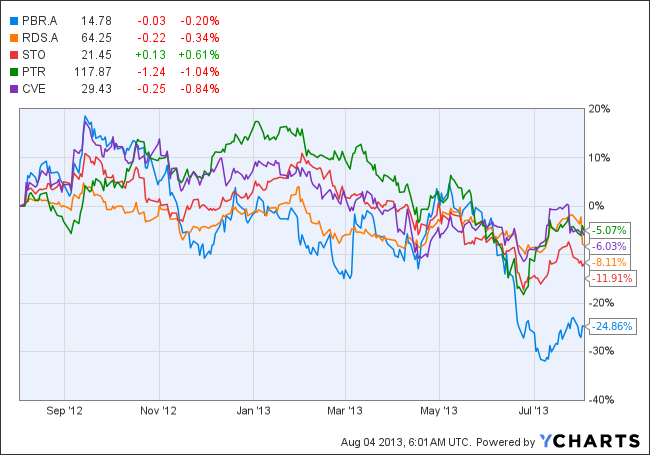 However, the picture looks quite different if we look only at the past 30 days market performance. With Petroleo Brasileiro Petrobras SA (ADR) (NYSE:PBR) and PetroChina Company Limited (ADR) (NYSE:PTR) leading the way, absolutely all of these oil stocks delivered positive returns bigger than 1%. Is this an early sign of recovery? 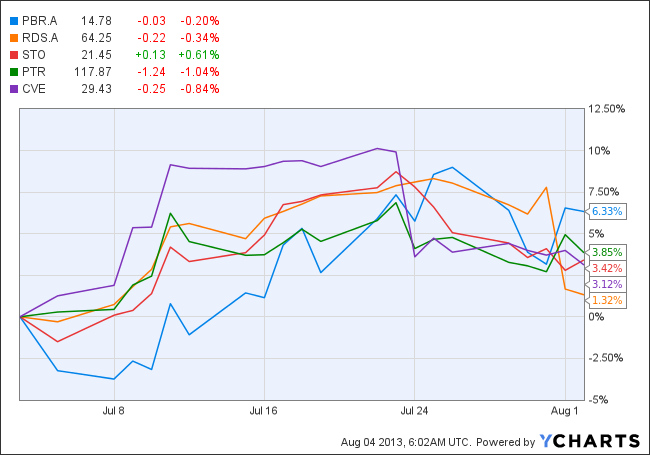 The macroeconomics of oil

Investing in oil is certainly not for the faint-hearted. Due to its high price volatility, oil should be seen as a trading investment. Some companies may be more exposed to oil volatility than others, however.

Supply shocks seem to be tightening the supply-demand balance, representing an upside for oil price. Since early June, crude oil inventories have been declining. Crude oil inventories usually decline this time of year, but not this much. The fact that institutions like the Department of Energy have fewer barrels of inventory is a bullish sign, as either a weaker supply or greater demand would push prices up. We are seeing more signals of a global macroeconomic recovery that is likely to increase demand. Chinese growth rates remain high as the country tries to stimulate national consumption and shift the economy from an export-driven to a consumption-based focus.

Now that we have seen why a mild increase in oil price is likely in the next three months, let us look at the companies that could benefit the most from this improvement.

The Brazilian giant is waking up

Let’s start with one of the biggest, Brazil’s Petroleo Brasileiro Petrobras SA (ADR) (NYSE:PBR). As the second largest energy company in South America in terms of market capitalization ($92 billion) and with a current share price well below its 52-weeks high ($14.5 current, $24.83 highest), the company provides value to investors.

Unfortunately, Petroleo Brasileiro Petrobras SA (ADR) (NYSE:PBR) relies entirely on Brazilian production and that adds significant geopolitical risks due to government policies, changes of political regime in the long run, royalties and variable taxes. It is also relatively expensive to develop oil infrastructure in Brazil due to the water depth. This adds up to a high risk, high-reward oil stock.

The company recently reported disappointing second quarter earnings, missing the street consensus and causing a 5.7% drop in price on the day of the announcement. Is this a buying opportunity?

At the moment, the company is still far from reaching the goals of its 2012-2015 plan (improving operating cash flows between 30 and 50% versus the previous four-year period, and capital investments of $120 to $130 billion over the period.) Royal Dutch Shell plc (ADR) (NYSE:RDS.A)’s $24 billion of cash generated during the first six months of the year is actually $2.7 billion less than the cash generated in 2012 over the same period. So far the company has only delivered $70 billion out of its $175-$200 billion target for the period.