Among the bigger oil exploration companies in the United States, Anadarko Petroleum Corporation (NYSE:APC) is an exception.

A malady affecting big oil companies
The international oil companies, or IOCs as they are better known, have been struggling lately with declining production volumes and increased expenditures. This is despite the overall exploration and production industry witnessing remarkable success since 2006. All across the globe, new oil and gas fields have been discovered with exploration and production companies adding new reserves and expanding operations.

Unfortunately, in this regard, the bigger exploration and production companies in the U.S. have been laggards. A classic case in point is Exxon Mobil Corporation (NYSE:XOM) whose gigantic legacy assets around the world are producing lesser and lesser oil. This has resulted in increased capital expenditures for the company without any meaningful addition to reserves.

The key to building reserves: ultra-deepwater
Most of the large oil and gas discoveries in the last five years have taken place in the deepwater and ultra-deepwater space. It’s no surprise that the biggest beneficiary among the big oil companies has been Brazil’s state-owned Petroleo Brasileiro Petrobras SA (ADR) (NYSE:PBR). The new frontier in the pre-salt Santos Basin has helped this national oil company increase its reserves substantially. Petroleo Brasileiro Petrobras SA (ADR) (NYSE:PBR) now expects these reserves to add 1 million barrels a day to production by 2017.

The Texas-based Anadarko Petroleum Corporation (NYSE:APC), however, seems to have got its strategy right. Without losing focus on the existing projects in its portfolio, the company maintained its exploration efforts in the deep waters of the Gulf of Mexico with some very positive results. 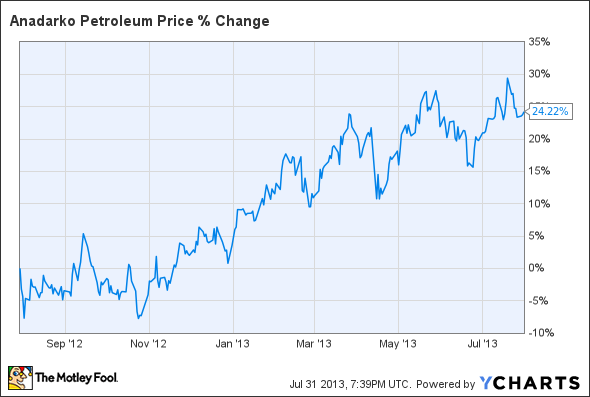 We shall see why this should immensely help the company in the long run. But before that, we’ll take a peek into Anadarko Petroleum Corporation (NYSE:APC)’s second-quarter results reported earlier this week.

An impressive second quarter? Not exactly…
Revenue stood at $3.5 billion — up almost 9% from last year’s second quarter. Net income boiled down to $929 million compared to a $89 million loss last year that was primarily due to impairment of unproved reserves worth $844 million. While sales from natural gas improved a whopping 89% thanks to higher natural gas prices this year, liquids sales (oil and natural gas liquids) fell 10%. Again, price dynamics played a role with average crude oil prices lower than those last year. While overall sales did improve, I would want to see a lesser dependence on the volatility of oil and gas prices.

What to Look for From Chevron Corporation (CVX) This Earnings Season