Out of thousands of stocks that are currently traded on the market, it is difficult to determine those that can really generate strong returns. Hedge funds and institutional investors spend millions of dollars on analysts with MBAs and PhDs, who are industry experts and well connected to other industry and media insiders on top of that. Individual investors can piggyback the hedge funds employing these talents and can benefit from their vast resources and knowledge in that way. We analyze quarterly 13F filings of over 700 hedge funds and, by looking at the smart money sentiment that surrounds a stock, we can determine whether it has potential to beat the market over the long-term. Therefore, let’s take a closer look at what smart money thinks about Performance Food Group Company (NYSE:PFGC).

Performance Food Group Company (NYSE:PFGC) has seen an increase in hedge fund sentiment lately. PFGC was in 23 hedge funds’ portfolios at the end of September. There were 18 hedge funds in our database with PFGC positions at the end of the previous quarter. Our calculations also showed that PFGC isn’t among the 30 most popular stocks among hedge funds.

In the 21st century investor’s toolkit there are a large number of indicators market participants use to appraise publicly traded companies. Some of the most underrated indicators are hedge fund and insider trading signals. We have shown that, historically, those who follow the best picks of the elite money managers can beat the market by a solid amount (see the details here). 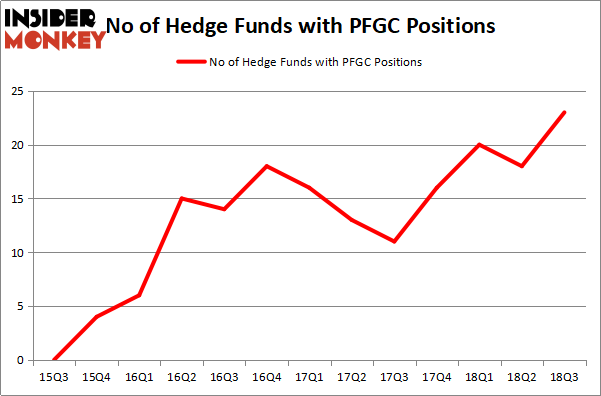 More specifically, GLG Partners was the largest shareholder of Performance Food Group Company (NYSE:PFGC), with a stake worth $27.8 million reported as of the end of September. Trailing GLG Partners was D E Shaw, which amassed a stake valued at $24.4 million. Renaissance Technologies, Two Sigma Advisors, and Millennium Management were also very fond of the stock, giving the stock large weights in their portfolios.

As you can see these stocks had an average of 17.75 hedge funds with bullish positions and the average amount invested in these stocks was $321 million. That figure was $225 million in PFGC’s case. Alteryx, Inc. (NYSE:AYX) is the most popular stock in this table. On the other hand RLI Corp. (NYSE:RLI) is the least popular one with only 11 bullish hedge fund positions. Performance Food Group Company (NYSE:PFGC) is not the most popular stock in this group but hedge fund interest is still above average. This is a slightly positive signal but we’d rather spend our time researching stocks that hedge funds are piling on. In this regard AYX might be a better candidate to consider a long position.

Incandescent Capital Gives Its View on Heritage Insurance
Monthly Newsletter Strategy
Download a free copy of our newsletter and see the details inside!
Hedge Fund Resource Center
Related News
Should You Add Performance Food Group Co (PFGC) to Your Portfolio? The 10 Best Islands to Visit in 2019 5 Most Socially Responsible Companies in America 5 Ways You Can Eliminate Credit Card Debt
Billionaire Hedge Funds