When a famous activist investor builds his stakes in certain publicly traded companies, shareholders might expect that he would push for corporate actions to unlock hidden value in them. Recently, it was reported that Nelson Peltz, a famous activist investor in the consumer goods industry, has been building stakes in both PepsiCo, Inc. (NYSE:PEP) and Mondelez International Inc (NASDAQ:MDLZ) through his Trian Fund Management. After the news, both companies moved up around 3% in one trading day. 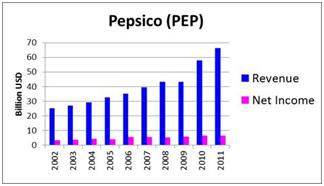 PepsiCo, with 29.9% of the global market share in 2011, is the second biggest global soft drink company, only after Coca-Cola. The company has seen some improvement from the turnaround plan it laid out last year. Both its fourth-quarter revenue and earnings exceeded analysts’ expectations.

Mondelez International Inc (NASDAQ:MDLZ) – The leader in the emerging markets

While PepsiCo, Inc. (NYSE:PEP) generates a great deal of profit from American Foods segment, Mondelez International Inc (NASDAQ:MDLZ) derived the majority of its revenue and income from emerging markets. In 2012, developing markets accounted for 45.4% of the total operating income, while Europe and North America represented around 35.4% and 19.2% of the total operating income, respectively.

What might interest investors, and Nelson Peltz as well, is the fact that Mondelez is the global market leader in Biscuits, Chocolate, Powdered Beverages, and Candy.

What attracts me further is Mondelez International Inc (NASDAQ:MDLZ)’s talented and shareholder oriented chief, Irene Rosenfeld. She is quite famous in the food & beverage industry with nearly 30 years of experience. Even though Warren Buffett didn’t like her move to sell the pizza business to purchase Cadbury, he has endorsed her to be a good businesswoman.

“Our first priority is the BRIC markets. Brazil, India, Russia and China represent about a third of our developing market revenues and will receive the lions share of our resources. Over the next five years, these countries are expected to grow mid- to high-teens and account for a significant portion of our growth.”

At around $30 per share, Mondelez International Inc (NASDAQ:MDLZ) is worth nearly $54 billion. I personally think that Mondelez is still undervalued at its current valuation of 12.6 times EV/EBITDA due to its huge potential and consistent growth. PepsiCo, Inc, at around $78 per share, has a much higher market cap of $120 billion. It is valued a bit cheaper at 11.8 times EV/EBITDA.

Danone has already been one of his targets