Coal stocks have been under constant pressure since the financial crisis. Most are trading at a fraction of pre-crisis value which has some investors wondering if the value of these stocks has plunged too far, making now a good time to invest in a rebound in coal. As you can see from the chart below, the performance has been absolutely abysmal: 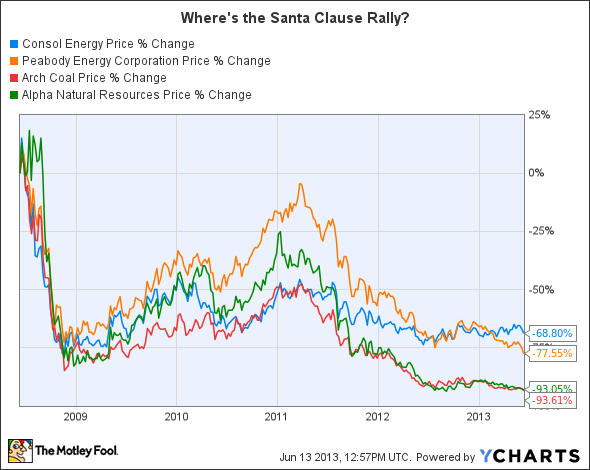 If that chart has you seeing opportunity instead of failure then I have good news for you. Among the group, I see two coal stocks with business models that set them apart from the group and give them an edge. If you are looking to invest in coal, these are the two stocks worth digging into if you want to play the future rebound of coal.

The global pure-play: Peabody Energy Corporation (NYSE:BTU)
With a leading presence in Australia, the southern Powder River Basin and the Illinois Basin, Peabody Energy Corporation (NYSE:BTU) has the best assets to access the world export markets. That’s vitally important because while coal might not be all that popular here in the U.S., Pacific Rim markets such as India and China are expected to import record coal volumes this year. Overall, seaborne thermal coal demand is likely to increase 50 million tonnes on growing Asian demand. The following slide really sums up coal demand from those two key Asian countries. Peabody Energy Corporation (NYSE:BTU) is ahead of its U.S.-based peers in tapping this demand. First, it acquired coal operations in Australia, which places it closer to its customers. In addition to that, it’s been active in securing long-term export capacity in the U.S. Last year it signed a deal with Kinder Morgan Energy Partners LP (NYSE:KMP) to increase its export capacity to more than 7 million tons of coal per year from Kinder Morgan Energy Partners LP (NYSE:KMP)’s Houston terminal. Overall, Kinder Morgan is adding to its coal export capacity in Louisiana as well as considering a coal export terminal at its existing bulk facility in Charleston, S.C. The clear trend here is that access to export markets is important to coal producers.