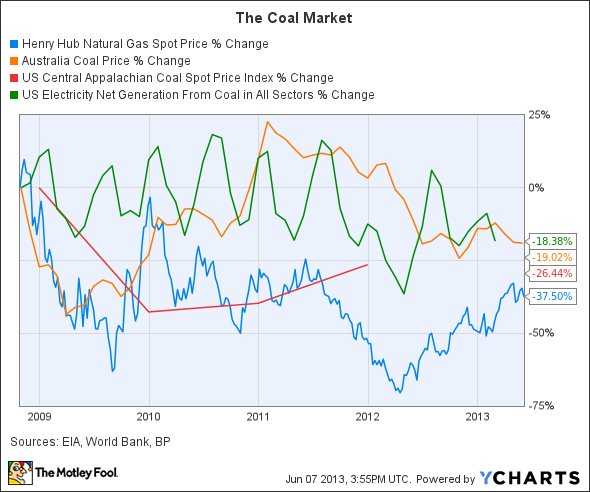 Peabody Energy Corporation (NYSE:BTU) is a strong thermal coal producer with mines on both sides of the Pacific. The company is heavily exposed to the Chinese economy as its Australian mines are right next door. China’s recent announcement that it is considering banning low quality coal caused a scare for coal exporters, but already China is considering loosening its restrictions. At any rate, the Chinese ban on low quality coal should help Australian miners like Peabody Energy Corporation (NYSE:BTU) and hurt low quality Indonesian miners.

Peabody Energy Corporation (NYSE:BTU)’s total debt to equity ratio of 1.26 is on the higher end of the scale, but the company’s diversified operations make its debt load manageable. Its gross margin of 25.1% is strong, though its EBIT margin of -0.9% needs to rise. Peabody Energy Corporation (NYSE:BTU) is currently trading at a 2014 forward price to earnings (P/E) ratio around 13, and it is one of the better deals within the industry.

Arch Coal Inc (NYSE:ACI) is another coal miner, and it is opening up a high quality metallurgical mine to diversify its product lines. The company expects that the Leer mine should open in Q4 2013. The high ore grades should provide a significant boost to its bottom line and earnings. Its expected 2014 earnings per share (EPS) of $-0.62 is a significant improvement from its expected 2013 EPS loss of $-1.27.

With a gross margin of 16.3% and a total debt to equity ratio of 1.84, Arch Coal Inc (NYSE:ACI) is one of the more questionable coal miners. While it has a quick ratio of 2.2 and looks stable for the time being, it isn’t attractive as Peabody Energy Corporation (NYSE:BTU).

Cloud Peak Energy Inc. (NYSE:CLD) has suffered, as lower prices for Australian coal hurt its export prospects in the Asian markets. Still, the company is a strong low cost producer of U.S. thermal coal with a gross margin of 23.1%. Its established operations in the Powder River Basin give it low margins and close access to the Asian export markets. Overall, Cloud Peak Energy Inc. (NYSE:CLD) is a great way to invest in cheap U.S. coal reserves without costly legacy assets.