Coal companies are still recovering from write downs, but slowly, the industry is coming back. Now, there are a number of companies trading at or below book value. Simply buying up the entire industry is not a good idea, but there are some miners that are trading at very attractive valuations. 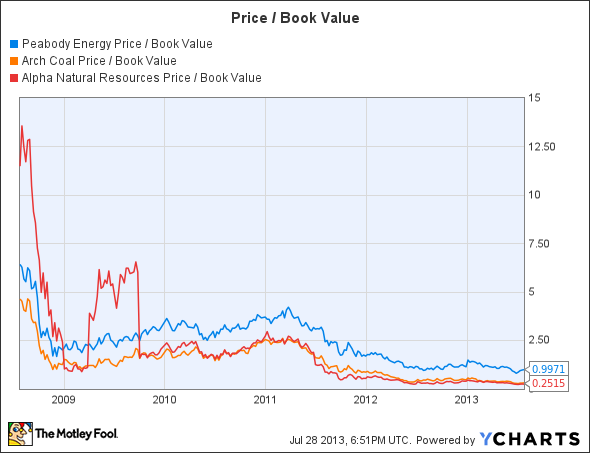 In the world of finance, there is a powerful phenomenon called the momentum effect. The stock market is not 100% efficient, and herding behavior causes stocks with negative returns to be pushed far below a reasonable price. Researchers have found that it is possible to make an excess return by buying past winners and selling past losers.

The momentum effect has been alive and well in the coal industry. Mine closures in the U.S. and tempered Chinese demand have sent coal stocks lower. America’s natural gas boom created unsustainably low natural gas prices, and coal demand fell like a rock. 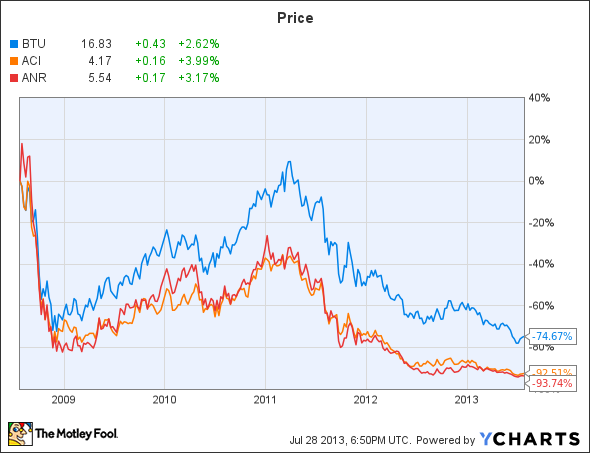 Peabody Energy Corporation (NYSE:BTU) is trading a price to book (P/B) ratio close to 1, but that does not automatically make it a poor value investment. Over the past five years, Peabody has held its value better than a number of its competitors, and with good reason. With a gross margin of 25.1%, Peabody has a superior cost structure. It recently closed its Air Quality Mine to improve its long-term profit.

Some of Peabody Energy Corporation (NYSE:BTU)’s most important assets are in Australia. With India as a chronic coal importer, Peabody has an advantage in serving the Asian giant. Investing in Peabody shouldn’t be a short-term venture. While it was able to post earnings per share (EPS) of $0.72, in 2014, its yearly EPS expected to return to $0.76.

Arch Coal Inc (NYSE:ACI) is trading at a much steeper discount, and with good reason. Its P/B ratio of around 0.32 must be considered within the context of its lower gross margin of 16.3% and expected losses for 2013 and 2014. The company is a U.S. miner and is stuck competing with overseas miners that enjoy lower shipping costs. In the Asian import market, there are also many low-cost Indonesian miners that can easily compete with imported U.S. coal.

Arch Coal Inc (NYSE:ACI)’s total debt to equity of 1.84 is significant, considering that the company is expected to lose money for a number of years. With its quick ratio of 2.2, it should be able to pay its bills for the time being, but in 2014, things may start becoming dicey.

Alpha Natural Resources, Inc. (NYSE:ANR) is similar to Arch Coal Inc (NYSE:ACI). Its lower total debt to equity ratio of 0.7 is tempered by its low quick ratio of 0.8. A low quick ratio means that the company has less cash in the bank to cover short-term obligations.