Hedge fund managers like David Einhorn, Dan Loeb, or Carl Icahn became billionaires through reaping large profits for their investors, which is why piggybacking their stock picks may provide us with significant returns as well. Many hedge funds, like Paul Singer’s Elliott Management, are pretty secretive, but we can still get some insights by analyzing their quarterly 13F filings. One of the most fertile grounds for large abnormal returns is hedge funds’ most popular small-cap picks, which are not so widely followed and often trade at a discount to their intrinsic value. In this article we will check out hedge fund activity in another small-cap stock: PDC Energy Inc (NASDAQ:PDCE).

Is PDC Energy Inc (NASDAQ:PDCE) a healthy stock for your portfolio? The smart money is betting on the stock. The number of bullish hedge fund bets increased by 4 recently. Our calculations also showed that pdce isn’t among the 30 most popular stocks among hedge funds. PDCE was in 19 hedge funds’ portfolios at the end of the third quarter of 2018. There were 15 hedge funds in our database with PDCE positions at the end of the previous quarter.

In today’s marketplace there are dozens of signals market participants employ to grade stocks. Two of the less known signals are hedge fund and insider trading signals. Our experts have shown that, historically, those who follow the best picks of the elite investment managers can outperform the broader indices by a solid margin (see the details here). 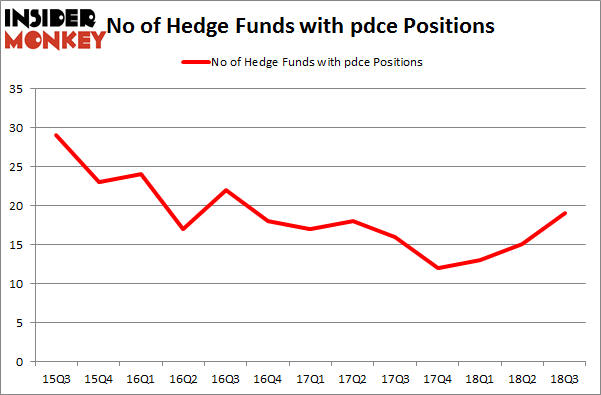 Among these funds, Mangrove Partners held the most valuable stake in PDC Energy Inc (NASDAQ:PDCE), which was worth $33.8 million at the end of the third quarter. On the second spot was Citadel Investment Group which amassed $33.3 million worth of shares. Moreover, D E Shaw, Brenham Capital Management, and Perella Weinberg Partners were also bullish on PDC Energy Inc (NASDAQ:PDCE), allocating a large percentage of their portfolios to this stock.

As you can see these stocks had an average of 16 hedge funds with bullish positions and the average amount invested in these stocks was $234 million. That figure was $182 million in PDCE’s case. Hilton Grand Vacations Inc. (NYSE:HGV) is the most popular stock in this table. On the other hand Sensient Technologies Corporation (NYSE:SXT) is the least popular one with only 11 bullish hedge fund positions. PDC Energy Inc (NASDAQ:PDCE) is not the most popular stock in this group but hedge fund interest is still above average. This is a slightly positive signal but we’d rather spend our time researching stocks that hedge funds are piling on. In this regard HGV might be a better candidate to consider a long position.

Charles River Laboratories International Inc. (CRL): Are Hedge Funds Right...
Monthly Newsletter Strategy
Download a free copy of our newsletter and see the details inside!
Hedge Fund Resource Center
Related News
Newell, Office Depot, Anadarko Petroleum, and More: Why These Stocks Are Moving Should You Buy PDC Energy Inc (PDCE)? Why Tesla, Chesapeake, and 3 Other Companies Are in the Spotlight Today A Look At 5 Stocks Which Are Trending On Wednesday Noteworthy Insider Trading Activity at These 5 Companies as Insider Buying Ratio Increases Insider Selling At Chemed Corporation (CHE), PDC Energy Inc. (PDCE) And Others; How Much Should Investors Worry? What Do Hedge Funds Think of PDC Energy Inc (PDCE)? 11 Countries With The Worst Modern Music In The World The Top 5 Robo Advisor Apps of 2018 Five Reasons You Need a Day-Trading Mentor
Billionaire Hedge Funds